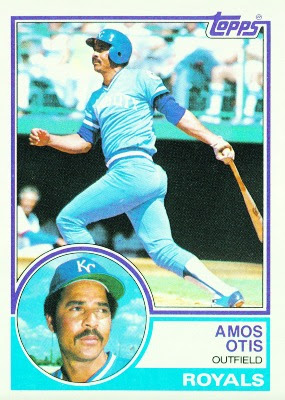 Card:  This is the veteran Otis' 15th Topps card.
Pic:  Another card flooded with light blue...blue uniform, blue dugout, blue railing, blue border, and even a blue sky in the inset.﻿
Player:  Amos Otis was drafted by Boston in 1965 and played Rookie ball as a third baseman.  Otis also played some outfield and the corner infield spots in A-ball in '66.  After the '66 season he was taken by the Mets in the minor league draft.  With the Mets AAA farm club Otis played mainly outfield and received a September call up to the big team.  He batted .220 in 59 at bats in '67 but spent the entire '68 season in the minors.  Otis made the Mets squad in '69 and was a reserve outfielder and played occasionally at the hot corner, which he did not care for.  After a 5-14 start he struggled mightily and was sent down in June.  He returned in September but hit only.151 in 93 at bats on the year.  Otis was not part of the Mets championship run in the playoffs.  Following the '69 season he was traded along with Bob Johnson to Kansas City for Joe Foy.

Otis' production lagged in '75 although he did tie an AL record with seven steals over a two game span.  He missed time due to a tonsillectomy and played in only 132 games and batted just .247.  Otis and the Royals won the AL West the next three seasons but lost to the Yankees each year.  Otis injured his ankle in his first at bat and missed the rest of the '76 ALCS, batted .125 in the '77 playoffs, and even his .428 effort in '77 couldn't take the Royals past the Yanks.  During the regular season Otis stole between 23-32 bases, hit 17-22 homers and led the AL with 40 doubles in 1976.

Otis had a good year in '79 batting .295 with 18 long balls and 30 steals.  He missed the first 39 games of 1980 and struggled for most of the year, batting only .251.  The Royals however won the AL West and Otis hit .333 in a three game sweep of the Yankees.  Otis shined in the World Series, hitting three home runs and batting .478, but the Phillies took the title anyway.

Otis was never again an everyday player playing in 99, 125, and 98 games over the next three years for KC.  He batted between .261 - .286 and still manned centerfield despite the presence of speedy Willie Wilson.  Otis left after the '83 season for the Pirates.  Otis started the year as the everyday leftfielder but he failed to hit and was relegated to part time duty.  Otis was released in August after batting only .165 in 97 at bats.  At 37, Otis retired with 2,020 hits, 193 home runs, 341 steals, and a .277 average. 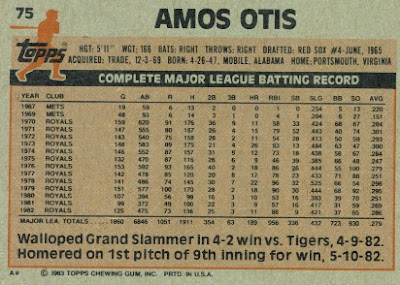 Flipside:  Hard to top those two highlights listed.  He also had a 4-4 day with two home runs in a 6-1 win over the Angels on the Fourth of July.
Oddball:  Otis nearly was a Pirate much earlier than '84.  After the '76 season he was dealt along with Cookie Rojas for Al Oliver, but Rojas vetoed the trade by exercising his 10-and-5 rights.
Otis admitted in Baseball Digest to corking his bat for the last fourteen years of his career.
History:  Otis, a quiet no-nonsense star, was a rangy centerfielder who provided both speed and power.  His base running was excellent as he was successful in 78.5% of his steal attempts.  He won three gold gloves, made five all-star teams, and received MVP votes in five seasons. He received a World Series share from the '69 Mets  team but not a ring.  He didn't last long enough to win a championship with KC in '85.  A nice bio on Otis can be read here.
Otis was a hitting instructor in the Rockies chain for a while in the 90's.