Topps features Dave Stapleton on his third card and based on where he is looking, this is probably a practice swing from the on deck circle.  The red and blue go well with the Red Sox cards. 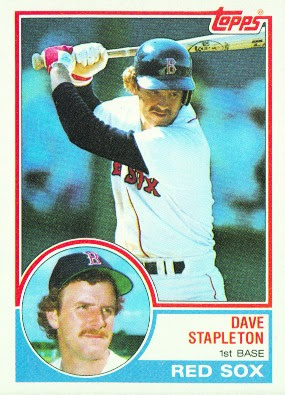 Player:  Dave Stapleton was a 10th round pick of the Red Sox in 1975.  He advanced quickly and was playing at AAA Pawtucket by '77.  By the end of the '79 season he was International League MVP but still hadn't made it to the top level of pro baseball.
Stapleton started the 1980 season at Pawtucket and tore the cover off the ball to a .340/.378/.433 line in 164 trips to the plate.  The Red Sox finally gave him the a promotion when Jerry Remy came down with an injury in May.  Stapleton stayed hot and hit .321/.338/.463 in 472 plate appearances.  Although he hit only seven homers he put a few dents in the Green Monster with 33 doubles.  He played mainly at second base but also played a handful of games at four other positions and finished second in AL ROY voting to Joe Charbonneau.
The versatile Stapleton remained a staple in the Boston lineup the next three years.  He batted a respectable .285 with 10 HR in '82 while playing all four infield positions, mainly shortstop.  The next two years he was primarily stationed at first base but saw his production continue to decline as his average slipped to .264 and then .247.
Stapleton wrecked his knee 13 games into the '84 season and missed the rest of the year.  While he was out, the Red Sox acquired first baseman Bill Buckner to fill the void.  As players began to report to spring training in '85, Stapleton refused to sign his one-year contract unless it was guaranteed.  He eventually came around but was no longer starter material.  He filled in at second and first base and batted .227 in 71 plate appearances.  He played even less in '86 and batted a meager .128.  It seems his role was reduced to pinch running for Buckner and taking over defensively in the late innings.  Something about Stapleton on the bench, while Buckner stayed on the field late in Game 6 of the World Series...you know the story.
The Red Sox granted Stapleton free agency after the '86 season and he signed with the Mariners.  He was a spring training casualty and retired.  His final stats: .271/.310/.398, 41 HR in 7 seasons. 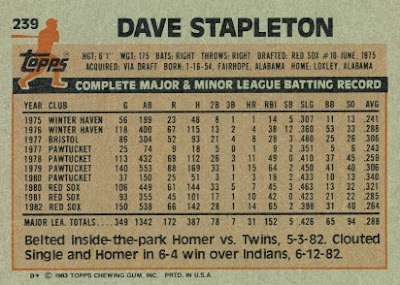 Flipside:  The longer he stayed at Pawtucket the better he got.  Too bad the opposite happened in the majors with his average decreasing all six seasons after his rookie year.  Stapleton is the only player with that distinction.
Oddball:  I mentioned Stapleton's runner up finish to Charbonneau in the AL Rookie of the Year voting and looking at the entire group who received votes is quite interesting.
1. Charbonneau  Last year 1982, career 8.2 WAR
2. Stapleton '86, 1.1
3. Doug Corbett  '87, 8.7
4. Damaso Garcia '89, 5.5
5. Britt Burns  '85, 16.8
6. Rickey Peters  '86, 2.9
7. Rich Dotson  '90, 14.0
Quite a disappointing group when taken as a whole.  Only Dotson played as late as 1990 and only he and Burns had over 9 career WAR.  I'm not sure how that compares to other rookie classes, but it sure seems weak.
History:  Much has been written about Red Sox manager John McNamara not using Stapleton in Game 6 of the '86 World Series. Buckner doesn't deserve all the blame for the Red Sox falling short. In the same vein, Stapleton is now forever linked to Buckner and it easy to forget that he had some early success in his career before his skills quickly eroded.