I think Dwight Bernard is the first player I've featured that I totally do not remember.  Bernard finally got a second Topps card after appearing on a three-player rookie card as a Met in the '79 Topps set.
Bernard seems leary of the camera man's intentions as the Marlboro ad looms in the background.  The Brewer pitchers sure have a lot of posed shots in this set. 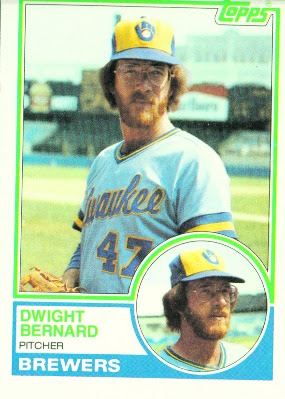 Player:  Dwight Bernard was drafted by the Mets in the 2nd round of the '74 draft and was pitching at AAA Tidewater as early as 1975.  His future looked bright as he sported a 3.26 ERA and allowed just 96 hits in 126 innings.  Alas, wildness was his undoing and he languished at AAA until he was converted to the bullpen in '78.
A 1.64 ERA in 44 innings got the Mets attention and he was called up to the parent club in the middle of '78.  He pitched 48 innings and while an ERA of 4.31 seems merely sub-par, a WHIP of 1.688 shows he wasn't fooling major league hitters.
Bernard made the Mets opening day roster in '79 but found his sophomore year even more difficult as his 4.70 ERA and 1.932 WHIP show.  He contributed 44 innings for the Mets and spent the middle of the year back at Tidewater.
The Mets and Bernard parted ways after the '79 season as New York traded the bushy bearded Bernard to the Brewers for Mark Bomback.  Bernard split the '80 season getting roughed up at AAA and AA with ERA's over seven at both stops.  After he straightened things out in '81 at AAA Vancouver, he was called up in September and pitched in six games for the Brew Crew and added 2.1 scoreless innings in the divisional series loss to the Yankees.
He pitched well enough in '82  to avoid the minor leagues for the first time in his career.  Working in middle relief, he chipped in with six saves when Rollie Fingers wasn't available.  Bernard worked 79 innings with a 3.76 ERA (102 ERA+) for the pennant winning Brewers.  He pitched one clean inning in both the ALCS and World Series.
Bernard failed to make the team in '83 but hung around the minors three more years before calling it quits.  He retired with a 4.14 career ERA and 1.602 WHIP in 176 innings.
Stuff:  Fastball around 85, sinker, slider, change up 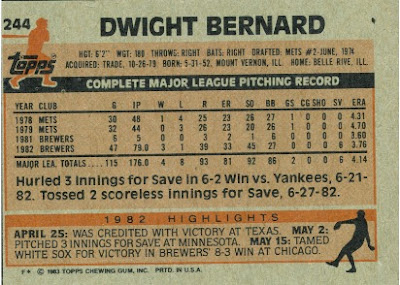 Oddball:  I love reading the The Scouting Report: 1983 for insight into the players from the '83 set, especially obscure guys like Bernard.  At the end of Bernard's profile Ned Martin opines "Bernard is about the best reliever the Brewers have behind Fingers and Slaton.  He seems to have matured finally."
Brooks Robinson was closer to home when he stated "He is really just another guy to fill out your pitching roster."

History:  Bernard had a mediocre fastball and sketchy control which explains his lack of success.  Looking at his career numbers he allowed 10 hits and 4.4 walks per 9 innings.  When he hit his spots he was OK, otherwise the base runners were like a merry-go-round.  Bernard has been a pitching coach in the minors since he stopped playing.  He currently serves in that role for the Tacoma Rainers.
Here he is without his beard and glasses!