By the time Steve Kemp's 7th Topps card came out he was no longer a member of the White Sox.  When collectors viewed this card for the first time he was the newest toy in Yankees owner George Steinbrenner's toy chest.  Due to the Yankees facial hair restrictions, Kemp had to leave the beard behind.  Unfortunately his best years and health were left behind too. 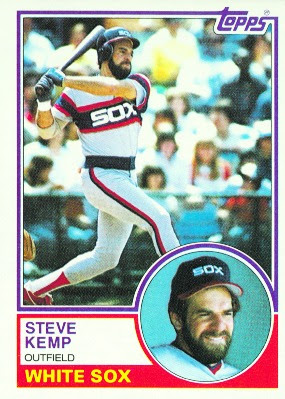 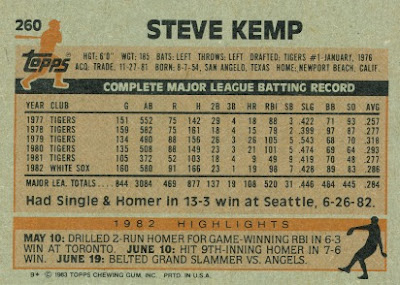 Flipside:  Kemp had a great start to his career and had comparable stats to Dave Winfiled, Al Oliver, and Gary Matthews through his age 27 season.  Six years later he was more comparable to Willard Marshall and Mel Hall.

History:  Kemp came up with the nucleus of young Tigers that went on to form the '84 World Champs, but Kemp never sniffed the postseason.  He had good on base ability and power which helped establish him as a star in Detroit in the late 70's.
Burdened with a mid-career slump, the expectations of a huge contract, and a devastating injury, Kemp's career hit the skids in New York.  He had 16.4 WAR before the trade and just 0.9 afterwards.  (Meanwhile Chet Lemon went on to 28.7 WAR in his nine seasons in Detroit).  Unfortunately for Kemp he is best remembered for what could have been.