Topps can call him Rich if they want, but Gossage will always be Goose to me.  This is Goose's 11th Topps card and to call him Rich on all his cards seems so formal.
All in all a pretty cool action shot along with a good look at Gossage's all business stare in the cameo pic. 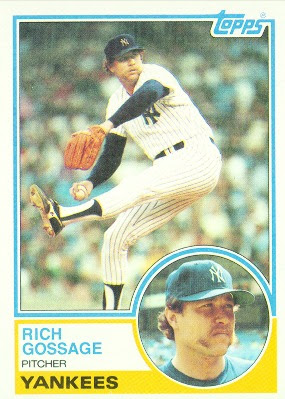 Player:  Goose Gossage was selected by the White Sox in the 10th round of the 1970 draft.  Until that point he was always called Rick but when Chicago scout Bill Kimball referred to Gossage as Rich, the name stuck.  In '71 he dominated single-A ball with an 18-2 record and 1.83 ERA. The next spring Gossage's mound movements reminded veteran Tom Bradley of a goose which earned him his well known moniker.  Whatever you call him, the 20 year-old Gossage made the team in '72 and pitched in long relief.  His fastball was explosive but untamed and he walked 44 in 80 innings with a 4.28 ERA.
Gossage continued to locate his pitches in '73, walking more than he struck out (37/33) with a 7.43 ERA in 49 frames.  His wildness relegated him to middle relief but he improved in '74 with a 4.13 ERA.  He won the closer's job in '75 and led the AL with 26 saves often pitching two or three innings per appearance.  In fact he had three outings that lasted seven or more innings.  This was a breakthrough year as he finally located his blazing fastball as he K'd 130 and allowed just 99 hits in 141 innings.
Perhaps thinking they could get more value out out their flamethrower, the White Sox inserted him into the rotation in '76.  Although he wasn't terrible, (3.94 ERA) he wasn't able to maintain the same energy through a game as he struckout  only 135 in 224 innings of work.  Gossage was not just a five or six inning starter by any means as he completed 15 of his 29 starts.  Gossage later remarked that waiting four or five days between appearances drove him nuts.
Gossage's former White Sox manager Chuck Tanner knew he was better suited to relieving and when Gossage came to Pittsburgh in a four player deal he returned to the fireman role, never to start a game again.  He picked up were he left off with a 1.62 ERA (244 ERA+) and 26 saves.  1977 would be Gossage's only year as a Pirate as the Yankee's opened up the checkbook and signed the free-agent Gossage to a six year deal.
It was in pinstripes that Gossage really established his dominance.  A Yankee from from '78 through '83, his ERA's ranged from 0.77 in the strike shortened '81 season to 2.62 in '79.  He saved 150 games, twice leading the Junior Circuit. He earned 18.3 WAR in his six years in the Big Apple and helped the Yankees win the '78 World Series as he baffled Dodger hitters in six shutout innings over three games.
His time in New York wasn't always smooth sailing as he entered under a lot of pressure having replaced Cy Young winner Sparky Lyle.  In the end, Gossage delivered domination and intimidation, unscored upon in the '78 and '81 World Series.
Gossage moved on to the Padres for the '84 season and helped improve the squad as they won the NL pennant.  As a nine-year old kid I will never forget Kirk Gibson launching a HR off of him to help seal the Tigers World Series in Game 5.  Gossage came after Gibby with heat as he had overpowered the young star earlier in his career, but Gibby got the fearsome Goose that night and sent me and the rest of Michigan into hysteria.
After two effective years in San Diego, he started to regress and had a poor '86 campaign (4.45 ERA).  Despite improving in '87 (3.12 ERA) he shared closer duties with a young Lance McCullers.
The next year Gossage was traded to the Cubs and this marked the start of journeyman phase that continued until 1994.  During this time he pitched a year for the Cubs, saving double digits for the last time.  He split the next year between the Giants and a short return to the Yankees.  He spent the first half of 1990 unable to find a taker in the majors and pitched half a year in Japan.
Gossage pitched for the Rangers in '91 and then had one decent year and one poor year for the A's.  In his 22nd year in the majors he pitched for the Mariners.  The labor discord ended the '94 season and his career.  Although it came in a blowout, Goose fittingly had a three inning save in his last appearance against the Rangers on 8/14/1994.
Stuff:  Fastball, Fastball, Fastball in the mid 90's, and a slider.  Was still hitting high 80's as a 43 year-old in his last season. 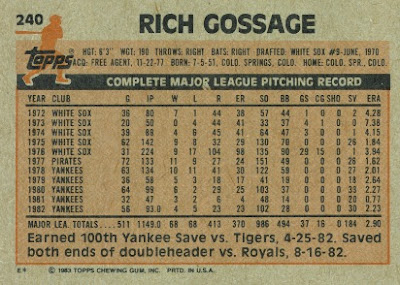 Flipside:  Pretty amazing that Gossage completed 16 of his 37 career starts.

Oddball:  Gossage claims he first grew his signature Fu-Manchu mustache as a way to tick off Yankee owner George Steinbrenner.  The Yankees' no facial hair policy mandated mustaches must be trimmed at the top of the upper lip.

Gossage also clashed with ownership in San Diego-
One of Goose's better quotes:

"She is poisoning the world with her hamburgers, and we can't even get a lousy beer." -  after Padres and McDonalds owner Joan Kroc, banned alcohol from the clubhouse.

History:  Gossage helped form the role of the intimidating fire blazing ace reliever.  Used in a fashion that would make modern GM's cringe, Gossage was his own set up man often slamming the door in the 7th or 8th inning.  Gossage retired with 310 saves and a 3.01 ERA (126 ERA+) and appeared in 1002 games.  Goose is a Yankee legend and helped the Padres establish themselves as a legitimate franchise as they made it to the World Series in '84.  He was inducted in the HOF in 2008.
Look for his Super Veteran card in the next post!
Posted by Brandon at 7:23 PM