Disclaimer: The Tigers are my home team and thus rewarded with a lengthy post. 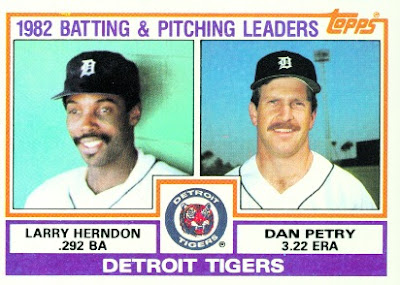 The 1982 Tigers won 83 games and finished in 4th place in the AL East.  It might be a bit of bit of a surprise to see Larry Herndon and Dan Petry as the Tigers leaders.  You may have expected to see Lou Whitaker or Alan Trammell here and many would have guessed Jack Morris to lead the team in ERA.  Well Herndon did lead the team with his .292 average and was also tops on the team with 88 RBI.  Lance Parrish bashed 32 HR, best of all Bengal batters in '82.  Morris' 4.06 ERA was actually the worst of the Tigers' four main starting pitchers in '82, but he was a workhorse if nothing else, topping the squad in wins (17), complete games (17), starts (37), innings (266), and strikeouts(135).  Petry had a fine year with 15 wins in 36 starts while tossing 246 innings at just age 23.
﻿ 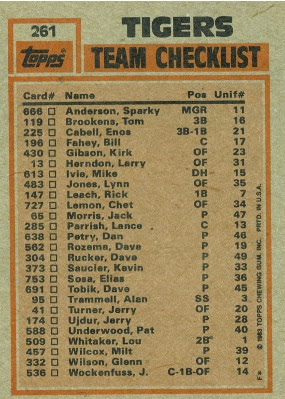 Flipside:  25 players and Manager Sparky Anderson were included in this set.  As of right now Anderson is the only Hall of Famer of the bunch, although Morris has garnered support in recent years as has Trammell to some degree.  Whitaker, who is more deserving than either, fell off the ballot a few years ago.
Dave Rozema got a card despite missing most of the year and pitching only 27 innings.  Rookie Larry Pashnick hurled 94 frames but was snubbed.


It's surprising to see the Wilson / Gibson platoon manning CF with Lemon in right.  Lemon still had plus range and would return to CF in '83.  Although Wilson was a fine outfielder and young Gibson could fly, neither was the defender of Lemon's caliber.