Steve Sax was the reigning National League Rookie of the Year when this card was pulled from packs back in 1983.  This isn't Sax's rookie card however as he shared a rookie card with fellow Dodgers Ron Roenicke and Mike Marshall in the '82 set.  The bright green border actually works on this card as Sax is surrounded by green grass and a hazy green outfield wall as a backdrop. 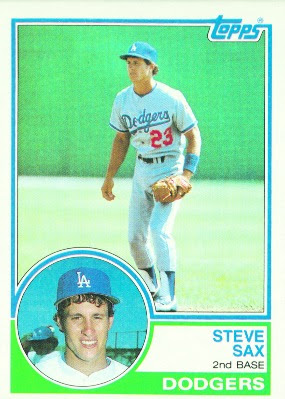 Player:  Steve Sax was drafted in the 9th round by the Dodgers in '76 and after a monster .346/.400/.456 season at AA Clinton in '81 he earned a late season call-up.  Sax provided a spark plug and batted .277 and earned a postseason roster spot.  Although he played in four games with just one at bat, Sax won a ring with the Dodgers before his rookie status had even expired.
Sax impressed enough to break up the Dodgers famed Garvey-Lopes-Russell-Cey infield and won the starting job at the keystone.  Sax did not disappoint.  Running out his base-on-balls, taking extra bases, and stealing 59 bases, he batted .282 and took home the Dodgers fourth straight NL ROY award following Sutcliffe, Howe, and Valenzuela.
Offensively the energetic Sax had a similar year in '83 but he struggled with his throws from second base leading to 30 errors.  More on that topic later.
Sax stole 27 to 42 bases a year over the next five years and although his batting average dipped to .243 in '84 he hit a career best .332 in '86.  The other three years in that time frame hit .279,.280, and .277.  His '86 season was his most productive as a pro as his 137 OPS+ is by far his career high.  Sax hit .300 in the '88 World Series as the Dodgers knocked off the A's for Sax's second Word Series ring.
The 28 year old Sax signed a free agent deal to play across the country for the Yankees.  He hit .315 his first year in pinstripes and according to his Wikipedia page set a Yankee record with 171 singles in a season.  His average fell to .260 in '90 but he raised it back to .304 in '91.
Sax was traded to the White Sox and '92 would be his last as a regular.  He stole 30 bases but batted just .236.  Chicago used Sax as a part-time left fielder and he batted .235 in 129 plate appearances.  He was left off the postseason roster and released after the season.  He played just one more year, wrapping up his career with 24 at bats for the A's in '94. 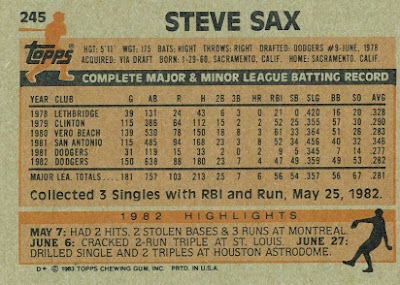 Flipside:  Sax had a very impressive year at AA San Antonio and it begs the question of why he never was promoted to AAA Albuquerque.  Well the Dodgers had an older second base prospect, Jack Perconte who was tearing it up as well.  In fact Perconte put up a .346/.447/.438 line while Sax matched Perconte's .346 average and added a .400 OBP and .456 SLG%.  It makes one wonder with Davey Lopes batting .206 why the Dodgers waited most of the year to promote their two second base farmhands.  In the long run it didn't matter as the Dodgers won it all.
Oddball:  During the 1985 regular season Sax had only 8 doubles in 551 trips to the plate.  In that years playoffs he hit 3 two-baggers in 21 plate appearances.  The next year Sax was 2nd in the NL with 43 doubles.
History:  Sax had a great start to his career but was washed up by age 34.  He retired with a .281/.335/.358 line and had 1,949 hits in his 14 year career.  His throwing was so erratic in the early 80's that some Dodger fans sitting behind first base took to wearing helmets.  His struggles were more of a mental block than anything which earned the him distinction of getting his own "syndrome".
Although he overcame his struggles he was rather error prone through his career for a second baseman finishing with a career .978 fielding percentage. In this flowery article, Sax describes how he tamed his scatter arm.
Sax was a five time All-Star who won a Silver Slugger award in '86 and won titles with the Dodgers in '81 and '88.  Sax amassed 22.9 WAR during his career.