I thought I published this post last weekend but somehow I skipped Buckner.  Happy Thanksgiving Everyone!

Bill Buckner looks like he just hit a line drive down the right field line.  The color combo on this card works pretty good on Buckner's 13th Topps card.  I'm pretty sure that is Leon Durham in the background.  He batted behind Buckner 97 times in '82.  Billy Buck sure has some thick eyebrows and mustache! 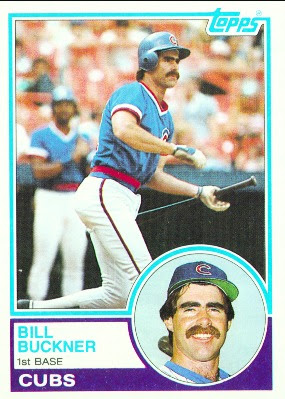 Player:  A 2nd round pick of the Dodgers in '68, Bill Buckner was promoted to LA in '69 after hitting .322 at three levels but received just one at bat.  Only 20 years old, Buckner started the 1970 season as the Dodgers leftfielder but was sent back down in May with a sub .200 average.  He raked in AAA to the tune of .335 earning him another look in September.
Buckner made the Dodgers in '71 as a platoon RF and also saw some action at first base.  He showed great contact ability, striking out just 4% of the time with averages of .277 and .319 and 5 homers each year.  Buckner was a full time player three of the next four years with his average topping .300 in '74 and '76.  He had good wheels early in his career as evidenced by his 31 steals in '74.
Before the '77 season, Buckner was sent to the Cubs for Rick Monday.  Buckner shared time his first two years in Chicago before becoming the Cubs everyday first sacker.  From '77 to '83 Buckner hit .301 and hit double digits in the HR column, averaging a dozen a year.  Buckner led the NL in batting average at .324 in 1980 while striking out just 18 times in 615 plate appearances.
While not the prototypical home run clubbing slugger, he topped the Senior Circuit in doubles in '81 and '83.  When this card came out Buckner was coming off a decent season as he drove in over 100 for the first time in '82 and batted .306 with 15 homers.
By 1984 Buckner lost his starting job to Leon Durham.  He batted just .209 in his first 21 games and the Cubs sent him to the Red Sox for Dennis Eckersley.  Buckner batted .276 with 11 homers for his new team.  He played in every game in '85 batting .299 with 46, doubles, 16 homers and 110 RBI.  He even swiped 18 bases.
Although his average fell to .267, Buckner hit a career best 18 dingers and drove in over 100 for the third time in his career.  The pennant winning Red Sox dropped the World Series with Buckner labeled as the goat despite the team blowing several opportunities to put the Mets away.
Booed in Boston and razzed on the road, Buckner got out of town when he was released in July of '87.  With his best years behind him, Buckner DH'd part time for the Angels and Royals through the '89 season.  He returned to Boston in 1990 as a pinch hitter and although most of Red Sox nation received him warmly upon his return, the 40 year-old had reached the end of the road and he batted just .186 in 43 at bats.  Great video from ESPN's E:60. 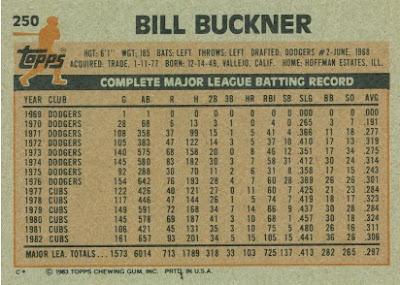 Flipside:  Buckner's had one major flaw in his game and that was his lack of base on balls.  He walked only 450 times or 4.4% of his plate appearances and 111 of those were intentional passes.
After the '82 season Buckner had walked 282 times in his career to 265 strikeouts.  When he returned to Boston in 1990 he had 450 of each before K'ing three times without a walk.
Oddball:  Buckner demanded a trade in '84 when he found out he wouldn't be starting for the Cubs.  According to my 1985 Zander Hollister Handook, a trade with the Phillies fell through when they failed to sweeten Buckner's already robust 5 year-$3.5 million contract.  Billy Bucks blocked the deal and the rest is history.
Buckner is one of five players to have played in the 60's and 90's.  The others: Rick Dempsey, Nolan Ryan, Jerry Reuss, and Carlton Fisk.
History:  Although his name still conjures up bad memories for a lot of Red Sox fans, time has helped heal wounds caused by Boston's collapse in '86.  He received a long standing ovation from fans when he threw out the first pitch on opening day in 2007 as the Red Sox celebrated their World Series championship the year prior.
Buckner hit over .300 seven times and posted a .289/.321/.408  line for his  career.  He was a hard nosed player who played through pain and had over 2,700 career hits.  ﻿
Posted by Brandon at 10:02 AM