Alan Wiggins shows off his left handed stance on his rookie card.  Padres' fan had to be optimistic with Wiggins and Tony Gwynn making the show in the early 80's. 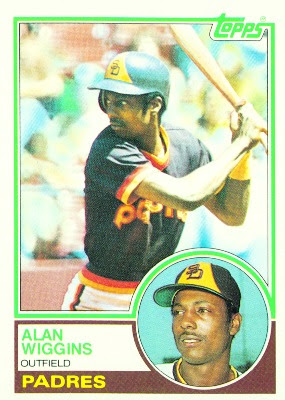 Player: Alan Wiggins was a lanky speedster who was with his third franchise by the time he broke though with the Padres in '81.  He hit .302 at AAA Hawaii in '81 with 73 steals.  That got him a 15 game September look in which he went 5 for 14 for the Padres.
The switch hitter batted .256/.295/.303 while playing left and centerfield in '82.  He was limited to 72 games because he was arrested for possession of cocaine and served a 30 day suspension and a stint in rehab.  He became an everyday player in '83 appearing at all three outfield spots and first base.  Wiggins sported a .276/.360/.324 line and swiped 66 bags.
The speedster found a home at secondbase in '84, a position he had played regularly in the minors.  He offset a .256 average with 75 walks and stole a team record 70 bases.  Wiggins was a sparkplug for the pennant winning Padres as he batted over .300 in the NLDS and World Series.
In the midst of a 2 for 37 start to the '85 season his drug problems popped up again.  After he acquired cocaine while still in rehab, Padres owner Joan Kroc vowed to run a clean team and traded him to the Orioles.  Wiggins hit .285 with 30 bases in half a season for his new team.
Wiggins hit .251 in a part time role in '86.  He occasionally DH'd and backed up Rick Burleson and Billy Ripken in '87 but the season was marred by an explosive argument with manager Cal Ripken Sr that earned him a three-game suspension.  He was batting .232 when he was suspended for failing a drug test and he eventually was released on September 29.
Wiggins career was over at age 29.  In seven seasons he batted .259/.330/.309 with 242 stolen bases.  Unfortunately he died from complications of AIDS less than four years later. 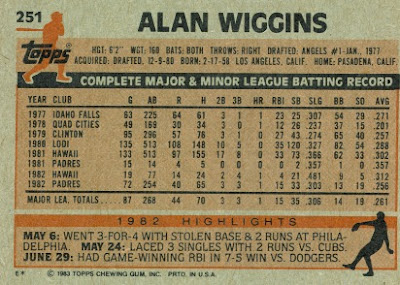 Flipside:  The Angels released Wiggins in June '78 after he got into a fight with one of his coaches.  The Dodgers snatched him up and he stole 120 bases at single-A Lodi in 1980.  Wiggins was arrested for marijuana possession and the Dodgers left him unprotected and he was taken by the Padres in the Rule 5 draft.
Oddball: Wiggins committed a whopping 32 errors at second base in '84.
History: Wiggins had 6.6 WAR over the '83-'84 seasons as he ignited the Padres offense.  It's sad that he played only seven years but a tragedy he died at age 32.  A great article on Wiggins can be read here.
Posted by Brandon at 10:25 AM