If you think Dave Smith's sunburned face is an accident think again.  He sports a similar raccoon appearance on virtually every picture you see of him.  Dude, use some sunblock!
The red and orange seats in the background go well with Smith's colorful Astros top here on his 3rd Topps card.  What disturbs me though is that the "action" picture shows him in a follow through, yet he is still holding the ball.
Meanwhile the Marlboro man lurks on yet another card. 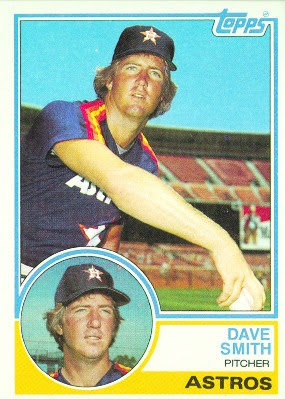 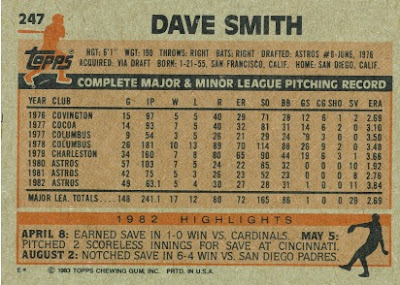 Oddball:  Smith was a laid back Californian who loved to surf while he was at San Diego State.  He used to upset his coach by showing up to practice late and still wearing his wet bathing suit.

History:  Dave Smith was a big part of the Astros three playoff teams in the '80s.  He won a game in the '80 NLCS but allowed Lenny Dykstra's winning HR in Game 3 of the '86 NLCS against the Mets.
The two-time all star was well liked by his teammates who remember him as a fierce competitor on the diamond and an easy going guy off the field.  Like his Astros teammates Joe Niekro and Vern Ruhle, Smith left this earth too soon when he died of a heart attack in 2008.
Posted by Brandon at 6:40 PM