A cool action shot of Rick Cerone here on his 7th Topps card.  Look at the dirt kicking up from the torque on his back foot. 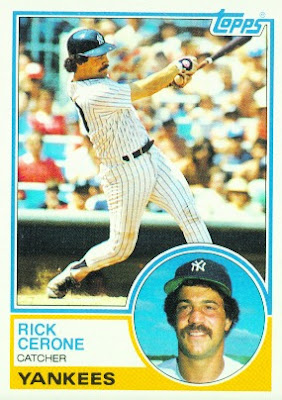 Player: Rick Cerone was the 7th overall pick of the Indians in 1975.  The young catcher reported to AAA and saw action with Cleveland before the season was over, with four hits in twelve at bats.  He spent all but seven games back at AAA in '76 and was traded with John Lowenstein to the expansion Blue Jays for Rico Carty.

The Yankees traded for Cerone and hoped he would help fill the void left by Thurman Munson's death.  At first, Cerone seemed up to the daunting task as he posted 3.9 WAR with 14 HR and 85 RBI.  He hit .277, gunned down over 50% of would be base stealers, and finished 7th in AL MVP voting.  Thumb injuries would limit Cerone's playing time and productivity the next two years as he hit just .244 and .227.

Cerone, now a free-agent, returned to the Bronx in '87 and hit .243/.320/.335 in part time work.  He and Yankee manager Billy Martin didn't see eye to eye and he was released on opening day in '88.  He was picked up by the Red Sox where he spent the next two years and put up similar rate stats. 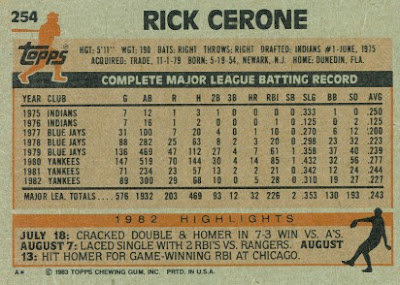 Flipside:  Despite starting the '75 season playing for Seton Hall University, Cerone wasn't terribly over matched in 12 at bats in the majors later that year.  He did not strikeout in any of his 12 at bats and only K'd once in 16 more at bats the next year. 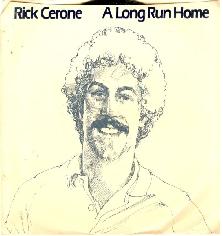 Oddball:  Rick Cerone recorded a song "A Long Run Home" in 1981 to benefit victims of an earthquake in Italy.  The song is about a ballplayer visiting a stadium during the middle of a snowstorm.  I kid you not.  I wish I could find an audio clip.
History:  Cerone had a long 18 year career but with just 6.0 career WAR.  He played in the postseason in 1980 and '81 with the Yankees.  He hit well in the '80 ALCS with 4 hits in 12 at bats and a homer.  In 1981 against the A's he went 6-18 with two doubles and a home run but had just five hits in the ALCS and World Series.  The Yankees lost to the Dodgers and that was as close as Cerone would get to a World Series title.
Posted by Brandon at 1:17 PM