Ray Knight's 5th Topps card shows him with a way too bright background in an otherwise nice action shot.  The 3rd BASE designation isn't quite accurate as Knight spent more time at firstbase in '82.  In the inset Knight has a far away gaze and a half smirk. What was he up to anyway?  Maybe he was thinking about Nancy Lopez, the pro golfer he would marry in October of '82. 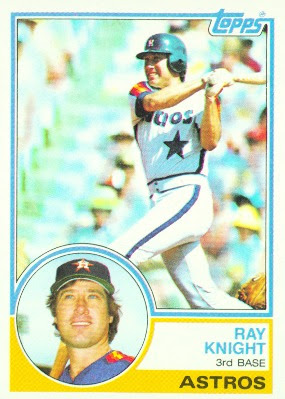 Player:  Ray Knight came up through the Reds system in the 70's and had the unenviable task of replacing Pete Rose at thirdbase.  He was drafted in the 10th round in 1970 and had his first taste of MLB action in '74 and had two hits in eleven at bats.  He would spend two more years in the minors before making it back to the Reds for goof in 1977.  Knight toiled four years at the AAA level with unremarkable results, having neither hit as much as .275 nor slug more than 10 homers.


Knight filled a utility role in '77 and '78, pinch hitting and filling in for stars Pete Rose in lopsided matches. Although he played in 163 games over the two years he had just 171 plate appearances. He batted .261 in '77 and .200 in '78 while playing six different positions. When Rose left for Philadelphia following the '78 season Knight took over at the hot corner. Little in his track record suggested the season that followed as Knight hit .318/.360/.454 with 37 doubles and 10 home runs. Knight had four hits in 14 at bats but the Reds lost to the Pirates in the NLCS. His surprising season culminated with a 5th place finish in the NL MVP vote.
Knight showed a bit more power in 1980 with 60 extra base hits compared to 51 the year prior but his average tumbled to .264. He made the first of two career All-Star appearances but he would continue to live up to the level of play established in '79. Knight had a slash line of .259/.322/.370 in '81 and his 18 double play ground outs led the league for the second year in a row. The last remnants of the Big Red machine still had a impact on his future as Johnny Bench's impending move to third base necessitated Knight's trade to the Astros.
As mentioned in the intro, Knight spent more time at firstbase than third in '82 as this was the result of a shoulder injury. His line drive stroke was well suited for the Astro Dome and he revitalized his career hitting .294 in '82 and .304 in '83 with OPS+ of 116 and 128. Although he was slow footed his shoulder was feeling good enough to return across the diamond to the hot corner in '84. Knight's hitting slumped and as he was losing his starter status he was traded to the Mets in August. His bat returned in Queens as he registered a .280 mark for the Mets after hitting just .223 for the Astros.
Fresh off elbow surgery, Knight platooned with the newly acquired Howard Johnson in '85 and hit a putrid .218 with a 68 OPS+. Johnson started '86 as the starter but was soon supplanted by Knight who hit .306 in April and .348 in May. Knight ended the year with a .298/.351/.424 line as the Mets won the NL East race. Although he hit just .167 in the NLCS he was key in the Mets World Series triumph over the Red Sox batting .391 with 5 RBI. The 33 year-old free-agent to be was named series MVP.
Buoyed by his postseason accolades Knight wanted a two year / $2.1 million deal to return to the Mets. New York's one year $800,000 deal was nowhere near what he had hoped for and when it was all said and done Knight settled for a one year $475,000 deal from the Orioles. (Knight later collected $400,000 in a collusion settlement). In Baltimore Knight was the starter at third with a handful of starts at both first base and DH. He matched a career best with 14 homers but also whiffed 90 times which was 28 more than his previous high. Although his .256 average wasn't anything impressive his play had kicked in a second year on the contract. Knight was surprised when he arrived at spring training in '88 to find out he had been traded to the Detroit TIgers. Knight joined a team of thirty-somethings in Motown and played firstbase batting a meager .217 with 3 HR in 327 plate appearances. Knight had decided that '88 would be his last season and he retired with a .271/.321/.390 line in 13 seasons. 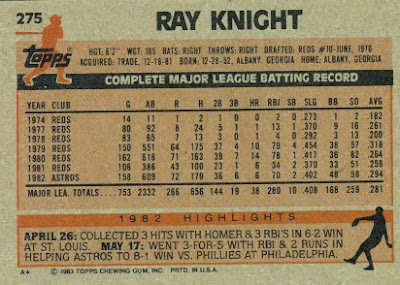 Flipside: Knight had 11 three-hit games in '82. So Topps had a few to choose from to highlight.

Oddball: Baseball Card Bust first may have been the first to suggest that Knight resembles the statues at Easter Island. I can't say I disagree. 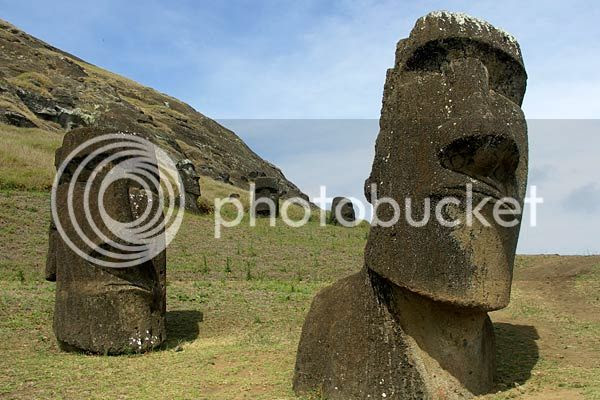 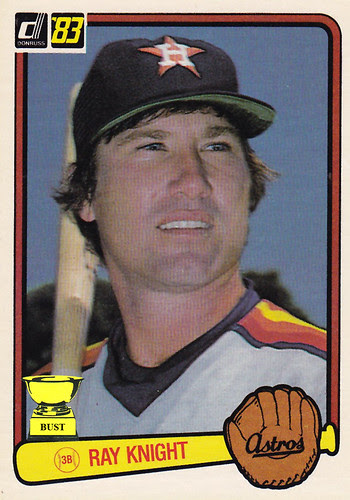 History: Knight was one of those player that always seemed overrated to me.  He had five seasons with WAR between 2.0 and 2.8 but nothing ever higher.  Adjectives such as gritty, winner, and hard-nosed followed Knight around wherever he went.  If he had been a middle infielder I'm sure he would have been called scrappy.  He finished his career with 10.8 WAR, a World Series ring and WS MVP to his credit.  Give him credit he was a good player but those of his caliber usually don't make two All-Star teams or get MVP votes in three separate seasons.
Knight and Lopez were married almost three decades before divorcing in 2009.  Today he works for the Nationals TV broadcast team.