Ernie Whitt first appeared on a Topps card in 1978 and had some pretty good company sharing a four player rookie card with Dale Murphy, Lance Parrish, and Bo Diaz.  It's nice to see Whitt with his chest protector in the cameo.  This is Whitt's fifth Topps card. 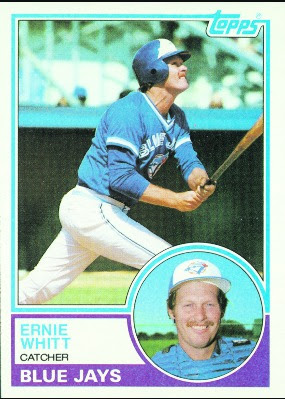 Player: Ernie Whitt is well known for his 12 years with the Blue Jays but most people forget he came up with the Red Sox.  Boston drafted Whitt in the 15th round in 1972 and gave him a look late in the '76 season.  He hit .222 with a home run but with Carlton Fisk in town there was little room for a young catcher. Whitt was left unprotected in the expansion draft and Toronto grabbed him with the 34th pick.
Whitt was probably glad to move to a new franchise but he was given little opportunity in Toronto. After playing just 25 games in '77 and '78 he spent all of '79 at AAA Syracuse.  He got his chance in 1980 and was the left-handed hitting platoon with Bob Davis and later Buck Martinez hacking from the right.  Whitt didn't immediately respond, hitting in the .230s with little power in the '80 and '81 seasons.
Now 30 years old, Whitt came through with a decent offensive season hitting .261 with 11 HR but played just 11 games after August 23 due to injuries.  Whitt would continue sitting out against most lefties and was a consistent performer for Toronto through the rest of the decade.  The next seven years he had an OPS+ between 104 and 120.  He was average defensively but supplied some decent pop with his lefty swing hitting 15 to 19 homers a year.
Whitt attracted little fanfare outside of Toronto but made the American League All-Star team in 1985 on the strength of a .279 average and ten dingers in the first half.  The Jays won the AL East later that year and again in '89 but Whitt struggled in the ALCS, both times hitting less than .200.
Toronto traded Whitt to Atlanta after the '89 season and he didn't do well at all in his new surroundings batting .172 in 204 trips to the plate.  Atlanta cut him loose after 1990 season and he returned to the AL with Baltimore.  Whitt was used sparingly and batted .242 in 62 at bats before receiving his release mid-year.  Now 39 years old, Whitt retired with a .249/.324/.410 line in 15 years of major league action 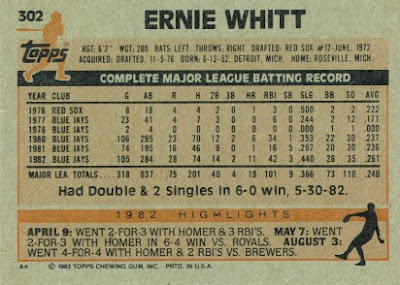 Flipside:  There used to be a lot of ball players born in Detroit.  In fact according to baseball reference, 118 players in MLB history claim that as their city of birth.  In less than half the set, I have profiled six here on the blog- Frank Tanana, Lary Sorensen, Tom Paciorek, Jeff Jones, Bill Fahey, and John Mayberry.  Whitt makes seven and we will see more.
Now it seems all the major leaguers come from the suburbs.  Well almost all of them, Cubs pitcher Chris Rusin debuted last year and was born in Detroit.  Before that there hadn't been a Detroit born player in the majors since John Smoltz last played in 2009.
Oddball:  Whitt sure enjoyed Detroit pitching launching 23 of his 134 career HR against the Tigers.  Putting his bullying of the Tigers in context he hit a home run every 17.8 at bats facing Detroit and every 34.8 against everyone else.  He terrorized Tiger hurlers so much I was surprised to find that his individual stats weren't better.  I guess I have memories of Whitt hitting a few homers into the upper deck at old Tiger Stadium etched in my brain.
History: Whitt took a while to find his niche but once he got going he was a reliable part of the Blue Jays emergence as a American League power.  So consistent, Whitt's yearly WAR totals were between 2.3 and 2.7 every year from '85 and '89.  His career totals aren't that impressive but he had a solid run north of the border but fell a few years short of the championship years in Toronto.
Posted by Brandon at 10:41 AM