Alright!  After a couple of obscure players we get baseball royalty at card number 300.  Michael. Jack. Schmidt.  Topps bestowed Pete Rose with card #100 and Rod Carew #200 so it makes sense to keep the long held pattern of issuing the round numbers to a star of Schmidt's caliber.  This a good action picture of Schmidt following through with his powerful swing but it looks like maybe he hit one on the ground to the right side.  He looks like a classic ballplayer with the eye black seen here on his 11th Topps card. 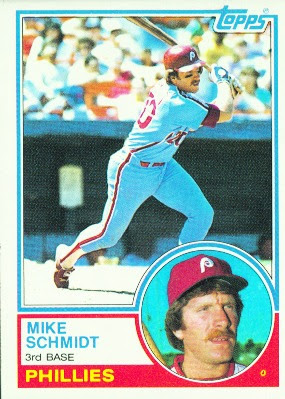 Player: Mike Schmidt was a second round pick by the Phillies out of Ohio University in 1971.  He played more shortstop and second base in the minors than third base.  But the hot corner would be his home in the majors and he first showed up in Philly at the tail end of the '72 season.  He hit a home run in his third game but was quite over matched striking out in nearly half of his 34 at bats.

Schmidt was still trying to solve major league pitching and struggled to keep his head above water in '73.  He batted just .196 and was still prone to strikeouts, something that unleashed the Philly boo birds, but he also showed bursts of power with 18 home runs.

The young slugger came into his own in 1974 with 36 home runs and a .282/.398/.546 line.  Schmidt followed it up with three consecutive seasons with 38 homers.  In April of  '76 Schmidt was on fire, launching four dingers at Wrigley Field on the 17th, one more in each of the next three games, and 12 in the Phillies first 15 games.  The power stats paint only a part of the picture. Schmidt was getting on base a lot via base on balls and playing tremendous defense at third, winning the first of ten Gold Gloves in '76.  Despite his success, through the '77 season he had yet to finish higher than third in MVP voting.

Philadelphia had been bounced out of the NLCS each of the '76, '77, and '78 seasons with nary a home run from their star slugger.  Schmidt redeemed himself in 1980 with an 8 for 21 World Series with a pair of homers and seven RBI.  He was tabbed World Series MVP and the monkey was off his back.

The '85 through '87 seasons saw Schmidt average 35 homers while winning a third MVP award in '86.  A rotator cuff injury plagued him in '88 and he hit 12 HR in 390 at bats.  When the '89 began Schmidt wasn't the same and played his last game on May 28 and announced his retirement the next day. 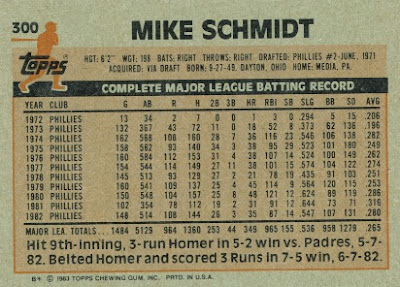 Flipside:  The home run on May 7 was a walk off job against the Padres Luis DeLeon.
Oddball:  Schmidt was voted to the National League All-Star team in 1989 despite being retired since May.  Although he participated in the pre-game ceremonies he did not play.
History:  Schmidt hit 548 HR in his 18 year career with a .267/.380/.527 stat line, a 147 OPS+, and 103 WAR.  A tremendous overall player he seems to be appreciated more now than during his playing days. Schmidt was great at charging the ball and he played deep on the artificial turf at Veterans Stadium allowing him to cover a lot of ground at third.  He was constantly among the leaders in both traditional and newer defensive metrics and he set the single season assist record with 404 assists from the hot corner in 1974.  It's often forgotten that he could steal bases too, ending his career with 174.
If not the best, then Schmidt is certainly on the short list of the greatest third basemen in history.  A first ballot Hall of Famer, Schmidt received 96.5% of the vote and was elected in his first year of eligibility in 1995.
Schmidt's Super Veteran card is coming up next.
Posted by Brandon at 9:55 AM