Gene Mauch looks pretty happy here on his 16th Topps manager card. Mauch had just one card as a player which appeared in the 1957 set.  When I was a kid, I was sure Mauch must have been in his 70s but he was just in his mid-50s when this picture was taken.  Must have been the white hair which fooled me for years with Sparky Anderson. 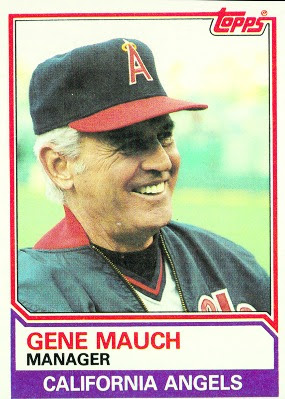 Player: Gene Mauch started his playing career during World War II and after a just one year in the minors, debuted with the Brooklyn Dodgers in 1944.  Playing shortstop, Mauch got into five games and had two hits in fifteen at bats but put his playing career on hold to join the Army Air Force.  He was stationed in Arizona and did not return to baseball until 1946.  After spending the '47 season at AAA, he saw action in the majors from 1947 through 1952 playing for the Pirates, Dodgers, Cubs, Braves, and Cardinals.  Used as a reserve middle infielder he played sparingly and batted less than .250 each year.
In 1953 the 27 year-old Mauch was sent to the Braves double-A affiliate in Atlanta and served as player-manager. He batted .268 at the teams secondbaseman and led the squad to a 84-70 record.  The Braves released Mauch and he put his managerial career on hold and played three years in the Cubs system.  He was sold to the Red Sox towards the end of the '56 season and got into seven games for Boston.  Mauch shared second base with Ted Lepcio in '57 and had his best year in the majors batting .270 in 222 at bats.
The Red Sox liked Mauch but more for his brain than his athletic prowess and sent him to triple-A to manage their affiliate in Minneapolis.  He guided the team to winning records both years and while he penciled his name in the lineup often in '58, by '59 he limited his playing to eight pinch hit appearances.
Manager: Mauch was just 34 years old when hired by the Phillies to be their field general in 1960.  The Phillies were a moribund franchise and surprised no one by finishing last in '60 and duplicating the feat in '61, a season marred by a 23 game losing streak.  The team began to improve and won 81 games in '62 and 87 in '63.  Led by sluggers Dick Allen and Johnny Callison the team was on the verge of the NL pennant in '64 holding a 6.5 game lead with 12 games left on the schedule.  Seeking just their second NL crown in 48 seasons, the Phillies lost ten straight in what has become known as the Phold.  Mauch was heavily criticized in the press for starting co-aces Jim Bunning and Chris Short twice each on two days rest over the stretch with disastrous results.  The Phillies won the last two games of the year but it was too little-too late, and they finished one game back of the Cardinals.
The next three seasons the Phillies were good but not great winning between 82 and 87 games each year.  Philadelphia started the '68 season 27-27 and the Phillies fired Mauch as he was tending to his hospitalized wife back in California.  He stated he held no hard feelings towards management for the awkward timing nor any animosity toward troubled Dick Allen who Mauch had struggled to handle.
Mauch was named manager of the newly formed Montreal Expos in September of 1968.  They took their lumps associated with most expansion teams, losing 110 in their inaugural season in '69.  The Expos were consistently mediocre under Mauch.  He guided them to 70 to 79 win seasons the next six years, keeping them out of last place but never finishing higher than fourth.  Management grew weary of Mauch's refusal to listen to advice from scouts ans staff and canned him following the '75 season.
Less than two months later Mauch was handed the reigns to the Minnesota Twins.  At this point in his career he had managed 15 full seasons in the majors, and had just one finish higher than fourth on his slate.  He was esteemed for runnung a tight ship and coaching the fundamentals- defense, bunting, what we now call small ball.  Under Mauch's reign the Twins finished in third or fourth place from '76 to '79 averaging 81 wins a year.  As the Twins 1980 season unfolded, Mauch was let go with a 54-71 record.
Mauch wasn't out of work long.  He was hired as the Angels director of player development and took over as field general when Jim Fregosi was shown the door in May of '81.  The Angels were 29-34 under Mauch but with a veteran laden team expectations were high going into the '82 season.  The Angels won 93 and topped the AL West delivering Mauch to the postseason for the first time in his 24 year career.  The Angels jumped out to a 2-0 series lead but blew it by losing the last three of the best of five set.  Once again Mauch found himself criticized for the way he handled his pitching staff as he started veterans Tommy John and Bruce Kison on short rest in games 4 and 5.  Mauch's contract was up and although offered an extension, he declined and retired saying he was "dead certain he'd never manage again".
Mauch came back to the Halos dugout when his replacement John McNamara turned down an offer to continue in '85.  The Angels won 90 but finished in 2nd place in his first year back.  The team won 92 in '86 and won the AL West giving Mauch another shot at the postseason.  The Angels were ahead in the seven game series 3 to 1 going into Game 5.  In the back-and-forth contest, California was just one strike away from the World Series when Boston's Dave Henderson hit a go ahead home run.  Although the Angels tied it up in the bottom of the ninth they lost the game in extra innings and the series when they were blown away in Games 6 and 7.
Despite the devastating end to the '86 season, Mauch returned in '87 but the Angels won just 75 games.  Mauch a lifelong smoker missed most of spring training in '88 with chronic bronchitis and decided to retire.   At that time his 27 seasons as manager trailed just Connie Mack, John McGraw, and Bucky Harris. 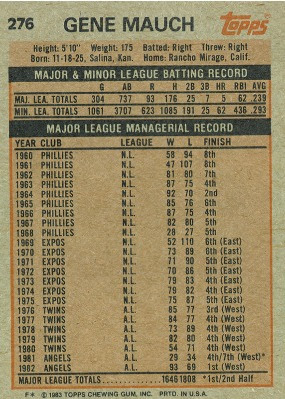 Flipside: Mauch finally got his elusive first place finish in '82 after finishing between 3rd and 6th every year since '64.
Oddball:  Looking over Mauch's playing career his '56 season at Los Angeles of the Pacific Coast League stands out like a strobe light in a dark closet.  He batted .348/.424/.516 with 20 homers in 650 plate appearances.  He never had a season anything like that before or after.  In fact he spent the previous two years with the same LA team batting .287 and .296 but never had hit more than 11 homers in a season. So what's the story?  Had Mauch stumbled upon some cold war steroids? Nah, he was stealing signs.  Mauch admits in "The Baseball Codes" to mastering sneaking a peek at the catcher's signs to alert him what pitch was coming.

History: Mauch's managerial style was one that thrived on attention to detail. He used the double switch frequently and loved the sacrifice bunt. According to Chris Jaffe's terrific study of manager tendencies from '67 to '80, every player under Mauch with at least 300 plate appearances had at least one sac bunt. He also loved to platoon, working that advantage more than other managers.

Mauch's career was filled with disappointment dating back to the Phold but the Angels collapses in '82 and '86 were devastating in their own right. He retired with a 1902-2037 record and is still cited as the guy who not only never won the big one, he never even get there. He returned to the dugout for a year in 1995 working as Bob Boone's bench coach in Kansas City.
Mauch passed away from lung cancer in 2005