This is veteran reliever Gene Garber's 10th Topps card.  Looks like Chris Chambliss in the ready position in the background. 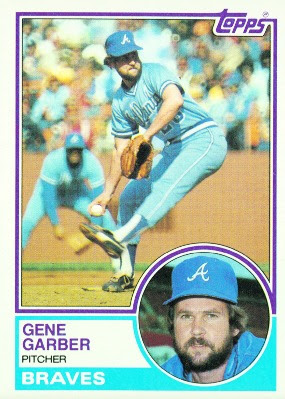 From this point on Garber was a pure reliever.  He spent the next three years as a formidable closer by committee option.  First as a duo with Tug McGraw and then Ron Reed joined to make it a trio in '76 and '77.  Garber's ERA dropped each year from 3.60 to 2.82 to 2.35 as he saved 44 games.  He was traded to Atlanta in the middle of the '78 season for Dick Ruthven.  Entrusted with ace reliever duties, Garber ended the year with a 2.15 ERA and 22 saves.

Surrounded by other talented relievers like Steve Bedrosian, Donnie Moore, Terry Forster, and Bruce Sutter, Garber saved just 21 games the next three years.  When Sutter was injured for most of the '86 season Garber stepped up and saved 24 with a 2.54 ERA.

Stuff:  Mid 80s sinker, slider, curve, and a change up that he threw with his middle finger tucker behind the ball. 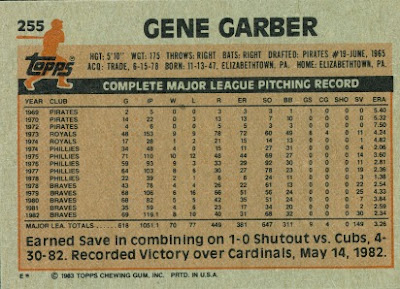 Flipside:  Wow, those stats are hard to see.  Looking at his career stats, Garber would throw over 100 relief innings six times in his career.
Oddball:  Gene Garber started a game as a centerfielder. What?!  Ok, here's the rub.  July 4, 1978 and Garber has pitched seven innings in three games over the last four days. Braves manager Bobby Cox knew he needed to give Garber a day off.  To resist the urge to use him, Cox wrote Garber's name 2nd in the Braves lineup as they visited Los Angeles.  After Jerry Royster grounded out to start the game, Cox sent up Rowland Office up to pinch hit, and Garber was out of the game.
History:  Garber is mainly remembered for two things- his twisting, near submarine delivery, and striking out Pete Rose to end his 44 game hitting streak.  According to baseballreference.com, he is the only player to save over 200 games and never make an All-Star team.
Now-a-days, Garber owns and operates a farm and specializes in the sale of emu oil.
Check out the next post which is Garber's Super Veteran card.
Are you on Twitter? Follow me @989baseball
Posted by Brandon at 1:16 PM