Jeff Lahti looks like he's snapping off a curve or slider here on his rookie card.  His hat looks pretty funky and even stranger in the inset.  Lahti got into only 33 games his first year, I wonder of the hat in the cameo pic is airbrushed. 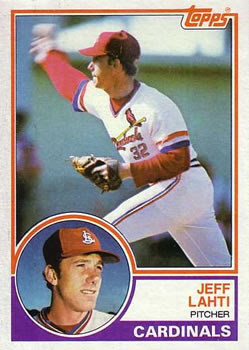 Player: Jeff Lahti was a fifth round pick of the Cincinnati Reds in 1978 but played his entire major league career with the St. Louis Cardinals.  After three seasons in the minors with a sub-3.00 ERA the Cards acquired him in April of '82.  He spent a couple of months in the minors before making his debut in June.
Cardinals manager Whitey Herzog used Lahti in middle relief and he pitched moderately well with a 3.81 ERA and 1.306 WHIP.  Lahti didn't pitch in the NLCS but made two appearances in the World Series against the Brewers, allowing two runs in 1.2 innings.  The Cardinals won the Fall Classic giving Lahti a championship in his first major league season.
Lahti moved into a setup role in '83 as he bridged the gap to Redbird closer Buce Sutter.  He recorded ERA's of 3.16 and 3.72 in '83 and '84 pitching a total of 158 innings.  When Sutter left for Atlanta via free-agency Lahti and lefty Ken Dayley shared closer duties in '85.  He allowed a few more base runners than years prior but was able to keep them from scoring and posting a 1.84 ERA in 68.1 innings. During one stretch he retired 27 consecutive batters.  Lahti, saved 19 games, Dayley 11, and newcomer Todd Worrell grabbed five saves at the end of the year.  The trio continued to share closing duties in the postseason with Dayley saving a pair and Lahti and Worrell one each.  The Cardinals of course lost to the Royals and their chances of winning a second World Series in four years.
Shoulder injuries and subsequent surgery limited Lahti to four games in '86.  He never recovered and retired with a career 3.12 ERA, 116 ERA+, 1.269 WHIP, and 20 saves.﻿

Flipside:  Lahti was given one start in '82 despite not starting a game at all since 1979.  It didn't go well as he allowed five runs in 4.1 innings.
Oddball:  Lahti's daughter Alyse Lahti Johnston was dating Tiger Woods for a while. Not sure of their status now, but yeah, I can't imagine that it's comfortable having your daughter attached to Tiger.
History:  Lahti had a brief career with a few years as a set up man and one in a shared closers role.  He currently owns and operates an apple orchard in Oregon.﻿
Posted by Brandon at 11:30 AM