Enjoy Floyd Chiffer's rookie card, it is his only Topps card.  I can't tell what is behind Chiffer in the background of the inset picture.  It almost appears like the photo was taken in the stadium parking lot. 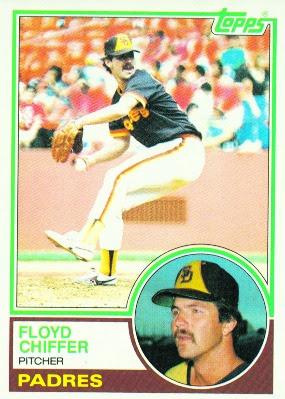 Player:  Floyd Chiffer was a 5th round pick of the San Diego Padres in 1978 and except for his first year in the minors he was used exclusively as a relief pitcher.  He broke camp with the Padres in '82 and appeared in 51 games, and was usually tasked with pitching the 6th or 7th inning or both.  He put in 79 innings with a 2.95 ERA and four saves.
As the '83 season unfolded Chiffer was pitching fairly well but wasn't getting much work, throwing just two innings over a 17 day stretch in May﻿.  Sent down to AAA, he did not return until September and ended the year with a 3.18 ERA in just 22 innings.
By 1984 the Padres staff was strong and Chiffer did not make the team.  Called up in May, he pitched in a dozen games with poor results and was returned to Las Vegas.  He was recalled in September and pitched in a few blowouts but was pretty much a forgotten man.  The Padres won the pennant but Chiffer and his 7.71ERA were nowhere near the playoff roster.
After the '84 season San Diego swapped Chiffer for Minnesota's Ray Smith. Chiffer never made it back to the majors ending his career in 1987 after stints with the Twins, Expos, and Braves organizations. 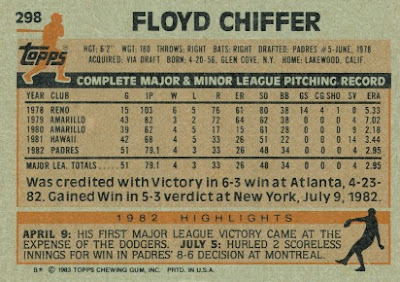 Flipside:  I wonder how many kids flipped this card over and saw his 2.95 ERA and thought this Chiffer rookie card might be worth hanging on to?  I was one of those kids who a few years later fell into the rookie card craze and stuffed every rookie card into a binder regardless of the player's potential.  Turns out there isn't a big market for middle reliever rookie cards.
Oddball:  Despite having not pitched in 19 days nor started a game in six years, Chiffer was given the start in game two of a double header at the tail end of '84.  The results were not surprising given the circumstances- five runs allowed in four frames.  The Pads won the game 8-6 but that would be that would be Chiffer's last game in the majors.
History:  Chiffer had just one full year in the majors and a couple of partial seasons.  His big hurdle was his control as he walked 60 in 130 innings. He ended his career with a 5-5 mark and 5 saves.  His LinkedIn profile indicates he is Sales Manager for an Opthalmics company.  It must be pretty darn cool to put "Professional Athlete" on your past work history.
﻿
Posted by Brandon at 11:54 AM