Jesse Barfield has a card of his own after sharing a three player card in the '82 set.  Amid Barfield's follow through in the sea of blue, a few Montreal Expos are looking on in the dugout, indicating a spring training photo.  A web of fencing and batting cage net lurks behind Barfield in the inset pic. 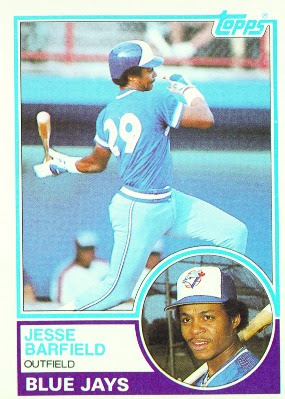 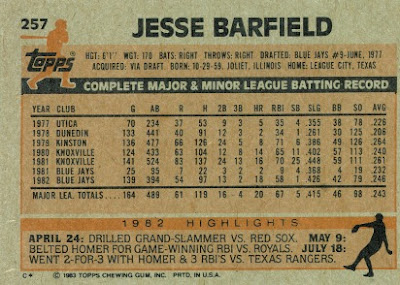 Flipside:  The Blue Jays may have been scared of Barfield's strikeout totals in the minors.  It used to be a big deal to K 100 times and he did it four years in a row before seeing MLB action.  Although he whiffed over 140 times five times in the majors he wasn't just a hacker as he was good for 60-80 base on balls a year.

Oddball:  While he was with the Yankees in '91 Barfield threw a ball out of Yankee Stadium.  On the wrong side of a lopsided score, he picked up a home run ball that bounced back on the field and fired it onto the subway tracks outside the stadium.

History:  Barfield is often regarded as having the best outfield arm in baseball in the 80's.  He threw out 162 runners in his 12 year career and nearly a third of his WAR came from his defense (11.7/37.2).  Barfield was recognized for his outfield prowess with Gold Gloves in '86 and '87, and should have already had a few on the mantle before that.
He helped the Blue Jays to their first playoffs in '85 and hit .280/.357/.440 in a losing cause against the Royals.  He only topped 20 stolen bases once but when he swiped 22 in '85 he became the Jays first 20/20 player.  He was an All-Star in '86, won a Silver Slugger award, and finished 5th in AL MVP voting.