This is the second card in the last nine to feature a player bunting.  In fact the last seven positional players have been pictured in the batters box.
This is Ned Yost's fourth Topps card and it looks like he got the bunt down.  The guy in the dugout right behind Yost looks like he has on an Angels jacket. 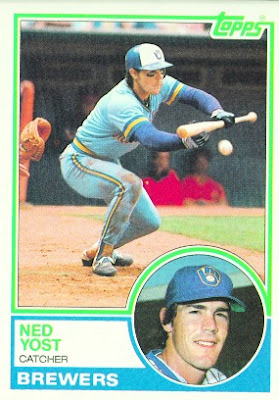 Player: In 1974 the New York Mets picked catcher Ned Yost in the secondary June draft.  After three unimpressive years in the minors including two with sub-.200 batting averages he was picked up by Milwaukee in the minor league rule 5 draft.  He made the Brewers roster in 1980 but played in just three of the first 18 games and was sent back down to AAA.  He returned in September and received enough playing time to finish with an odious .161/.161/.161 stat line in 31 at bats.
Yost was regarded s a good defensive catcher and was on the '81 squad all year.  He served as Milwaukee's number three catcher behind Ted Simmons and Charlie Moore.  If you didn't have a program you probably didn't know Yost was on the team.  He only played in 18 games with 27 at bats but he did show some unexpected power hitting three homers in the limited time.  He was given more action in '82, coming to bat 107 times with a .276/.324/.429 line for the pennant winning Brewers.  He walked in his only postseason appearance in the lopsided Game 6 loss to the Cardinals.
When the Brewers moved Moore permanently to RF it opened the door for Yost to be the #2 catcher. He started 57 games in '83 but responded with an unimpressive .224 average and a 67 OPS+.  He was then traded to the Rangers with a minor leaguer for Jim Sundberg. Yost split catching duties with Donnie Scott in Texas.  Neither one was effective with Yost posting a meager .182/.201/.273 line in 251 plate appearances.  Released by the Rangers the next spring he caught on with the Expos organization.  He spent all but a handful of games in '85 at AAA and had two hits in eleven at bats.
Yost spent two years playing in the minors for the Braves organization before starting his coaching career.  He retired with a career .212/.237/.329 stat line in six seasons of play. 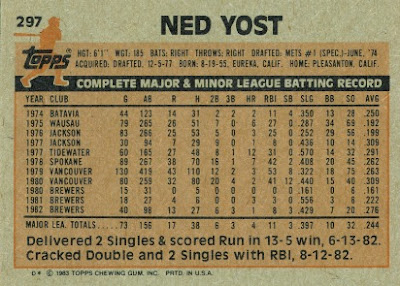 Flipside:  In 1974, the secondary June draft was for players from junior and community colleges.  Yost spent one year at Chabot College which has produced 14 major leaguers.

Oddball:  Yost was released on April Fools Day two years in a row-  Texas in '85 and Montreal in '86.  Seems like a cruel day to give somebody the pink slip.

History:  Yost made it to the big leagues on the strength of his defensive reputation.  He was agile and blessed with a strong arm but he struggled to get the ball off quickly.  For his career he threw out only 16% of would be base stealers.  Along with his poor bat, he was unable to stick in the majors long and he was done playing by age 30.
He managed the Brewers for six years and has been at the wheel for the Royals the last three seasons.