Rance Mulliniks looks like he is playing in the mud.  Seriously, what kind of infield is that?  Even if this is a spring training site, conditions sure have improved over the past 30 years.  Despite playing in the majors since 1977, this is just Mulliniks 4th Topps card.  The SS-2nd Base label is way off.  Mulliniks played 102 games at thirdbase in '82, 17 at shortstop, and zero at secondbase. 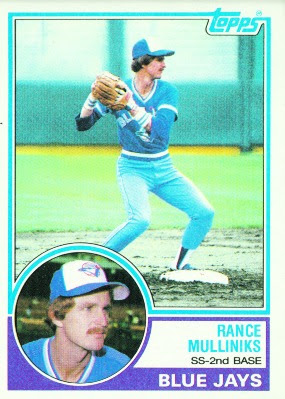 Player: Rance Mulliniks made his mark as a long time thirdbaseman with the Blue Jays, but before that he was a shortstop prospect with the Angels.  Drafted in the 3rd round in 1974, he got his shot in the majors when Bobby Grich missed the second half of the '77 season with back surgery.  Mulliniks was called up from AAA and played everyday as the Angels shortstop.  He did fairly well batting .269 as a rookie.  Grich played secondbase the next year and Mulliniks opened the season at short.  The sophomore slump hit him hard and after a .156 April he was benched and later sent back down to the minors not to return until September.
After failing to hold onto the shortstop job Mulliniks must have been determined to get off to a better start in '79.  He played well enough in spring to snag a starting job but history repeated itself and he was benched after hitting .153 in the first month.  He went back down to AAA and put up a .343/.427/.453 stat line.  Not sure what to make of Mulliniks' inability to hit major league pitching despite four consecutive .300 plus seasons in the minors, the Angels included him in a five player deal to the Royals.
He was able to make the Royals as a utility infielder but rarely played.  He had less than 100 combined at bats in the '80 and '81 seasons while batting .259 and .227.  Although the Royals went to the World Series in 1980, Mulliniks did not see any postseason action.  In spring training of '82 Kansas City traded him to Toronto which was the break he needed.
Mulliniks would make his mark north of the border as the left handed hitting half of an effective platoon with Garth Iorg.  Although he batted just .244 in '82, Mulliniks' best years lay ahead.  From '83 through '88 he batted .293/.374/.458 averaging 10 homers and 25 doubles in 400 plate appearances.  His average reached .300 or better three times and even though he wasn't a star, who wouldn't love a platoon with players named Rance Mulliniks and Garth Iorg!?>


Mulliniks slipped to a .238 average in '89 and but was productive with a .289/.417/.392 line in 1990 in 120 plate appearances. He was once again part of the Jays equation at DH in 1991 but lost a month due to a foot injury and batted just .250. He played in all five games of the ALCS loss to the Twins but mustered only one hit in eight at bats. The 36 year-old suffered through a back injury for most of '92 and had just three pinch at bats in September. The Jays weren't hurting for production at the DH spot having picked up Dave Winfield to fill the spot. Mulliniks was on the active roster in World Series but did not bat. He went out on top winning a World Series ring and announced his retirement after 16 years in the majors. 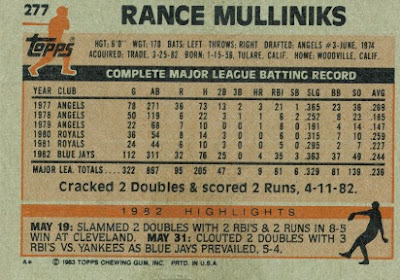 Flipside: All of Mulliniks highlights involve him swatting two doubles of which he seemed particularly fond. He hit 34 two-baggers the next year despite batting just 427 times.
Oddball: Mulliniks was the last batter in unusual game involving some epic players and a strange ending. The Jays hosted the Mariners who were wrapping up a four game set on July 1, 1991. In a battle of portsiders who would go on to excellent careers, Randy Johnson faced off against David Wells. M's star Ken GriffeyJr was given a rare day off and Seattle looking to split the series carried a 3-1 lead into the bottom of the ninth. At this point in his career the Big Unit was still harnessing his blazing fastball but in the midst of a season that saw him hand out a whopping 152 freebies, Johnson was on top of his game. In front of over 50,000 Blue Jay fans he had allowed just 2hits, K'd11, and walked nary a batter and was sent back out to finish off the Jays in the 9th.
Toronto's Mookie Wilson led off with a line drive double to rightfield to get things started. Devon White followed with a comebacker to Johnson but he threw wild putting runners at second and third with no out. M's skipper Jim Lefebvre gave Johnson the hook and called on slider specialist Mike Jackson to come in and face Roberto Alomar. On Jackson's first offering, Alomar ripped a double to tie the game. When Alomar stole thirdbase on the next pitch the winning run was just 90 feet away with no outs. Lefebvre ordered the bases loaded by intentionally walking Joe Carter and pinch hitter John Olerud.  Lefebvre hoping for a ground ball replaced Jackson on the bump with sinkerballer Rob Murphy. Blue Jays manager Cito Gaston countered by pinch hitting Mulliniks for Ed Sprague. Finally something seemed to go the Mariners way when Mulliniks hit a grounder to shortstop Omar Vizquel whose throw home easily beat Alomar. Unfortunately for Seattle, home plate arbiter Ken Kaiser ruled backstop Dave Valle missed the plate and Alomar scored the winning run.
History: Mulliniks found his niche with the Blue Jays and had a decent career with five seasons between 2 to 3 WAR. Rather pedestrian for a starter but Mulliniks was doing it about 400 plate appearances. He retired with a .272/.354/.407 stat line and a 107 OPS+.