This is the second rookie card in a row.  Although George Wright had a slightly longer career than Floyd Chiffer, you can pick up both cards up for pennies.  The Wright I remember rocked the jheri-curl.  Nice mesh hat dude. 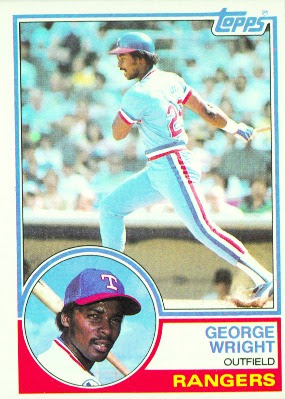 Player:  George Wright was the Rangers 4th round pick in 1977 and they converted him from a right handed batter to a switch hitter in the minor leagues.  He made the '82 Texas team as their starting centerfielder.  He played a shallow position but had the range to back it up, handling over three chances per nine innings.  Although he was rated as having an average arm his positioning helped him gun down 14 base runners.  The Rangers placed him in the leadoff spot based on his speed but he was ill-suited for the slot as he batted .264 with a .305 on base percentage.  Despite his swiftness he had just three steals in ten attempts.
Wright played all 162 games for the Rangers in '83.  He started the year batting in the number eight spot in the lineup and gradually moved up until he was batting fifth by mid-year. Before it was over he was in the three slot and finished the year with a .276/.321/.424 stat line with 18 home runs.
The future looked bright for the young outfielder in 1984 but he got off to a poor start and lost his starting job to Gary Ward.  He improved in the second half but hit just .243 with nine homers in 405 plate appearances.  He regained his starting job to start the '85 campaign but Wright was monumentally bad.  The Rangers gave him every chance to get his bat straightened out but he hit .190/.241/.242 in 363 at bats.  His negative 3.9 WAR represents one of the worst seasons ever.
The Rangers brought Wright back in '86 as a fourth outfielder but a defensive gaffe in left on June 16 would expedite the end of his tenure with the Rangers. Texas sold his contract to Montreal where he finished the year with a .202 average in 245 trips to the plate.  He played professional baseball for 11 more seasons for the White Sox, Royals, and Giants organizations, and also played in Mexico and Japan, but never appeared in the majors again. 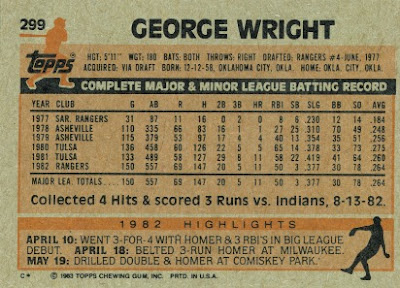 Flipside:  These highlights are nice but they do not mention his walk-off RBI single on May16th.

Oddball:  Wright earned 4.3 WAR in his first two years then somehow "earned" -7.2 WAR over the next three years.

History:  Wright had a decent start to his career but it soon went to crap.  His similarity scores through age 24 list Bernie Williams as comparable but then he played more like the subject of "Weekend at Bernie's".  Wright might not have been destined for stardom but his decline was severe and shocking to Rangers fans.
Wright didn't last long on the MLB scene but he carved out a niche south of the border, playing many years in Mexico before retiring at age 38 in 1997.