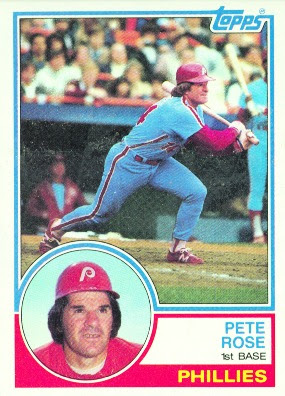 
Pic:  Rose looks like he just hit one to the right side and is struggling to fight his way through the wax residue on the card.


Player:  Pete Rose started his epic major league career in 1962 with his hometown Cincinnati Reds.  Although he won the Rookie of the Year, few could imagine the scrappy second baseman who batted .273 and .269 his first two years would go on to a record breaking career.  Rose, however would reel off nine consecutive seasons with a .300+ average, winning batting titles in '68, '69, and '73.  Rose had 8.5 wins above replacement in '73 and won the NL MVP.
Rose made the switch to the outfield in '67, first to leftfield, then to right for four years before returning to left in '72.
Rose and the Reds advanced to the playoffs both in '70 and '72 but fell short in the World Series both times, falling to the Orioles and A's respectively.  In '73 Rose hit two home runs and batted 8-21 in the NLCS, but the Reds were knocked out by the Mets. 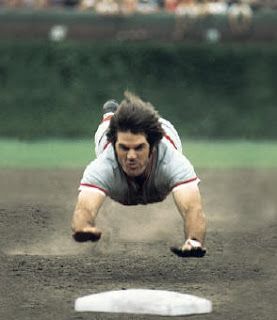 In '75 Rose made the switch to third base freeing up an outfield spot for George Foster.  The Big Red Machine was now complete and won the World Series in '75 and '76 with Rose batting a combined .338 in the post-season.

Rose signed with the Expos for the '84 season where he got his 4,000 career hit.  In August, Rose was traded back to the Reds for Tom Lawless.  Rose was made player-manager by the Reds.  He thrived in his return, hitting .365 the rest of the season.  Rose penciled his name into the lineup semi-regularly in '85, playing in 119 games.  He hit two homers, his first since the '82 season, and worked 86 walks.  Of course his season is remembered for the countdown to the all-time hit record.  He broke Ty Cobb's mark on 9/11/85.   At 45 years of age, Rose batted .219 in '86 and retired as an active player.

Rose continued to manage the Reds until leaving the post in '89 amid his scandalous involvement in betting on baseball.

There is so much more to Rose that can't be covered properly in a short blog.  Check out his wikipedia page if you want to read more about his 44 game hit streak, "Charlie Hustle" nickname, or him bowling over Ray Fosse in the 1970 All-Star game. 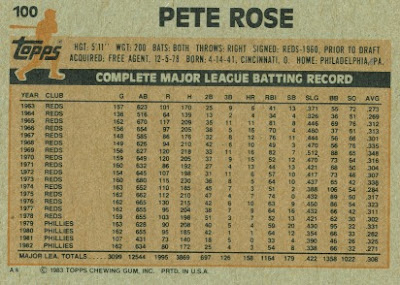 Flipside:  If you could read those tiny stats you'd see how remarkably durable Rose was.  He played all 162 games in '82 leading the NL in games played for the fifth time.
Oddball:  Rose's actress daughter Cara, goes by the screen name of Chea Courtney.  She has appeared on Melrose Place and the soap Passions.
History:  Rose holds many, many records including most career hits, games, and at bats.  He played 500+ games at five different positions and was named to 17 All-Star teams.  He won three World Series, an MVP in 1973, two Gold Gloves, and a Silver Slugger.
He was revered by sportswriters and broadcasters during his playing days for his baseball knowledge, often given credit for squeezing every ounce of talent from his body by playing as hard and smart as possible.
Unfortunately, these days the name Pete Rose conjures up  his betting on the Reds, his prison term for tax-evasion, and his black list from the game he loves.
﻿
Posted by Brandon at 1:07 PM