Card:  Alan Knicely appears on his third Topps card.  For the fourth consecutive card in the set, this is the players first solo card. 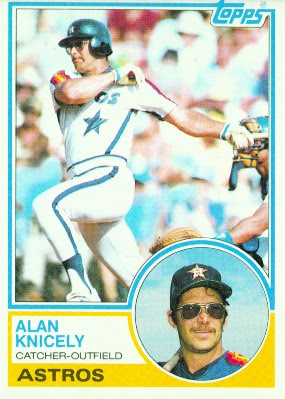 Pic:  Knicely looks like he hit one down the third base line in a spring training game.  Knicely is rocking the shades and the 'stache...more on that later.

Player:  Alan Knicely was drafted by the Astros in '74 as a pitcher.  He began the transformation to a corner infielder at single-A Dubuque in '76 and even pitched in 14 more games a year later.  In '78 at double-A Columbus, Knicely made the move to outfield but struggled with a .227 average.  He repeated at Columbus in '79 and was moved behind the plate.  Knicely tore it up, belting 33 HR with a line of .289/.383/.566 and was named co-winner of the Southern League's MVP with teammate Danny Heep.  The catcher went 0-6 in a September stint with the Astros.

Knicely was promoted to AAA in '80 and continued to rake, batting .318/22 HR/105 RBI.  He continued to learn the catcher position and K'd in his lone MLB at bat.  Knicely had another great year in the minors in '81 hitting .306 with 18 HR and 96 RBI.  He made the most of the seven at bats he received in September, hitting two HR and two singles while with the big club.  Knicely finally made the Astros in '82 as a third catcher, pinch hitter, and rightfielder.  He batted .188 in 136 at bats with two HR.

Knicely wasn't graceful behind the plate and Houston wasn't sure what to do with him, so they traded him to the Reds for Bill Dawley and Tony Walker.  The Reds no-facial hair policy didn't do any favors for Knicely's appearance.  Check out a montage of Knicely as seen through his Topps cards:

With the Reds, Knicely was again a third string catcher behind Dann Bilardello and Alex Trevino.  He batted .224 in 98 at bats and added a pair of HR.  Knicely was at AAA in '84 and batted .333 with 33 HR and 126 RBI.  His domination earned him another league MVP award and a September call up.  He batted just .138 in 29 at bats.

Knicely was up and down with the Reds and AAA in '85 and was enjoying his most productive MLB season when he was traded in August to the Phillies.  With his new franchise he spent all but seven at bats back in AAA.  In majors he hit a combined .242 with 5 dingers and while in the minors he batted .360 with 10 long balls.

Knicely was cut in the spring of '86 and picked up by St. Louis.  When Jack Clark was injured they called up Knicely to play first base, but he was unable to deliver, batting .195 in 85 at bats.  He spent all of '87 at AAA Oklahoma City and retired. 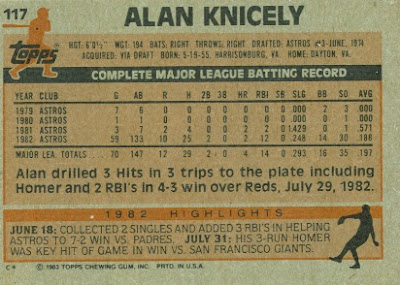 Flipside:  Man that is one off-center back!
Knicely's other HR was on July 29 and although he went 3-3, he also had a passed ball and an error.
Oddball:  Quoted in the August 4, 1986 issue of Sports Illustrated, Knicely said about a pop-up that hit him in the head, "That will come on Wide World of Sports right after the guy who falls off the ski slope."
History:  Knicely had quite an interesting career.  It must have been very frustrating to dominate minor league pitching but struggle in the majors.  In 600 MLB plate appearances he hit .213 with 12 HR.  In the minors he hit .295 with 159 HR.  He really didn't have a true position and I wonder how he would have done if he could have been a full time DH in the American League.
Posted by Brandon at 7:45 PM