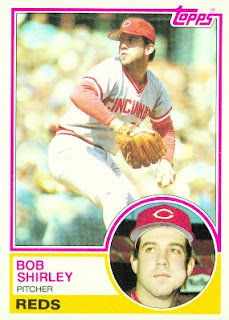 Pic:  A great action shot of Shirley getting ready to throw a forkball, a pitch he added to his repertoire in 1980.  I just wish the pic wasn’t so bright.
Player:  Bob Shirley joined the Padres after a distinguished career at the University of Oklahoma.  After he was drafted eighth overall in the January draft in '76, Shirley spent just one season in the minors.  The young lefty made the Padres rotation and began 1977 as their fourth starter.  By the end of the year he led the Padres in wins 12, ERA 3.70, innings 214, and strikeouts with 146.  Shirley started the '78 season in the rotation but was in and out of the pen all year.  He started 20 games and relieved in 30 others with a 3.69 ERA in 166 innings.
In 1979 Shirley started 25 of his 49 games and pitched in 205 innings with a 3.38 ERA.  He pitched in relief in all but 12 games in 1980 earning 7 saves in 137 innings with another sub-4 ERA.
Shirley was traded in the eleven player trade that sent Rollie Fingers and others to St. Louis.  Shirley changed teams but not roles, starting 11 of his 28 games with a 4.08 ERA.
On the cusp of the '82 season he was dealt to the Reds for Jeff Lahti and a minor leaguer.  Shirley recorded a 3.60 ERA starting 20 games and relieving in 21 more in what would be his only year in Cincinnati.
Shirley was signed as a free-agent by the Yankees in '83 and started the year in the rotation.  Despite pitching his second career shutout on 4/27, it was a rough year as he finished with 5.08 ERA.  He started 17 games but spent a good chunk of the year as a rarely used mop-up man.  The next three years with New York he assumed the swingman role pretty which much defined his career.
In '84 Shirley posted a 3.38 ERA in 114 innings.  In '85 he was even better with a career best 2.64 ERA in 109 innings.  He threw a lot of gopher balls in '86 and saw his ERA double.  In '87 he had a 4.50 ERA when he received his release from the Yankees in June (more on that later).  He signed with the Royals but pitched in only three games in KC after getting rocked for 12 runs in 7 innings.  He pitched in AAA through the '88 season and retired with a career 67-94 record, 18 saves and a 3.82 ERA. 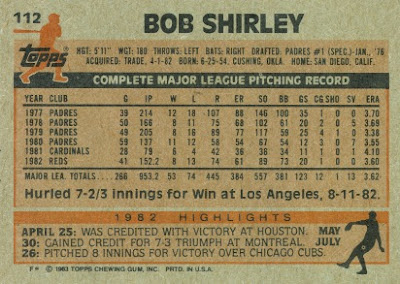 Flipside: The April 25 highlight is an odd game to mention since he pitched just 0.2 of an inning.  They could have mentioned his complete game win on August 21 when he struckout 7.
Oddball:  Although Shirley and his ex-Yankee teammates deny it, Don Mattingly first hurt his back in 1987 when he and Shirley were rough-housing in the Yankee locker room.  Donnie Baseball never really hit with the same authority after the injury.  We'll never know for sure if a playful Shirley / Mattingly wrestling match impacted Mattingly's career but Shirley was released the same day.
History:  Shirley had a weird career in that he logged his most innings in his rookie year.  Although effective that year, he never again lasted an entire year in the rotation. Throughout his career he seemed to have a habit of getting shelled early in games when he didn't have his good stuff, but was reliable when used in spot starts.  If he would've been born twenty years later he probably would have been used as a situational lefty and perhaps had a longer career.
Posted by Brandon at 9:13 PM