This is Barker’s 7th Topps card. 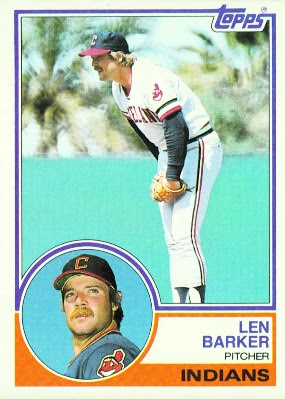 Pic:  Barker peers in towards the plate while blurry palm trees wave in the spring training background.  Hey, Barker makes four players in a row with a mustache!
Player:  Len Barker debuted with the Texas Rangers in September of 1976.  A third round pick in the '73 draft, he made two starts including a shutout in his second start.  He started the '77 season in the minors but was plugged into the Rangers rotation in July and pitched mainly in long relief.  He was effective in the role and earned two notable wins in marathon extra inning affairs.  On 9/17 he came into the game in 8th inning and pitched 9.2 innings of scoreless relief.  Eight days later he entered a game in the 7th and threw 8 innings of shutout ball to earn the win.  He finished the year with a 4-1 record and a 2.66 ERA in 47.1 innings.
Barker spent '78 in the pen and part of the year in AAA.  In 29 games he logged 52 innings with four saves and a 4.82 ERA.  After the season he was traded to Cleveland with Bobby Bonds for Larvell Blanks and Jim Kern.  With the Indians, Barker made 10 relief appearances before joining the rotation in June.   He wasn’t effective in either role and went 6-6 with a 4.92 ERA over 137 innings.  Barker was a workhorse in 1980 making 36 starts, logging 246 innings, and striking out a league best 187 innings.  He won 19 games despite a league average ERA of 4.17.
Barker's 1981 season, and career for that matter, were highlighted by a perfect game on May 15.  Here is a nice video recap.  Barker also started the All-Star game after the strike ended.  He finished the year 8-7 with a 3.91 ERA and once again led the AL with 127 strikeouts.  He had a solid year in '82 with a 3.90 ERA in 244 innings.  He completed 10 games and had a 15-11 record.
Barker was fighting through a rough '84 season when he was traded to Atlanta for three players to be named later.  While Barker pitched better for Atlanta he had only one win and the price the Braves paid was steep.  The Braves missed the playoffs and two of the players sent to Cleveland were Brett Butler and Brook Jacoby who both turned into All-Stars.  Barker's combined for a 9-16 record and a 4.88 ERA.
The big right-handed hurler signed a big five year deal with the Braves but missed time with an injury in '84, and posted a 3.85 ERA in 20 starts.  His '85 season was a disaster logging just 73 innings with a 6.35 ERA.
Before the '86 season started the Braves released Barker and ate the rest of his contract.  He bounced around the minors for a while and resurfaced with the Brewers in '87.  He made 11 starts with a 5.36 ERA.  Barker's once promising career was over at age 32.
Stuff:  Mid 90s fastball, curve, change 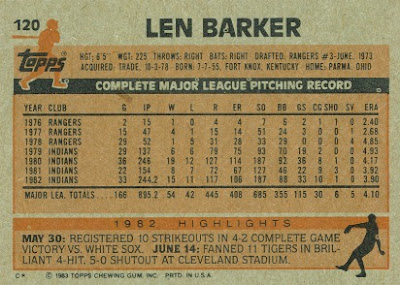 ﻿
Flipside:  Barker pitched ten innings in a game twice in '82, receiving a no decision both times.
Oddball:  One way to evaluate trades is compare Wins Above Replacement (WAR) that players accumulate for their new teams.  Barker after the Braves acquired him had 0.7 WAR.  The Indians got -0.7 WAR from Behenna, 15.7 WAR from Butler, and 14.1 from Jacoby.  So the Indians come out on top 29.1 to 0.7.
History:  Barker will always be remembered for his perfect game in '81.  Unfortunately many will also recall his burnout as a Brave.  Atlanta never should have paid such a steep price for Barker.  While the flame thrower racked up the K's he recorded an ERA+ over 100 just once as a starter with the Indians.  Barker pitched 11 seasons in the majors with a 4.34 ERA, a 74-76 record, and 975 strikeouts in 1323 innings.
﻿
Posted by Brandon at 8:01 PM