This is Smith's one and only Topps card. 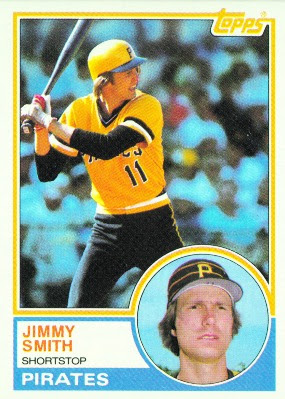 Player:  Jimmy Smith was drafted by the Orioles in the 6th round of the 1976 draft.  The Pirates were his third organ-ization by the time he reached the big leagues.  He made the Pittsburgh squad as backup infielder in '82.  Manager Chuck Tanner rode his starters hard as his four infield starters Jason Thompson, Johnny Ray, Dale Berra, and Bill Madlock aver-aged 157 games each.  The lanky Smith got into only 42 games, 14 of those as a pinch runner.  He batted .238  with two doubles and a triple in 52 plate appearances.
Before the '83 season started the Pirates sold Smith to the White Sox.  He spent the entire year in AAA and was released.  He tried catching on with the Tigers in '84 but was cut loose in spring training.  After that, he falls off the grid. 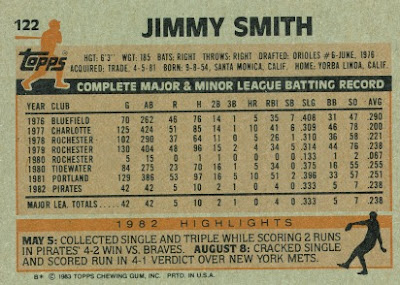 Flipside:  During a stretch of steady playing time, Smith had 7 hits in 15 at bats from May 4 to May 14.
Oddball:  Even though it is a common name there has been only one other Jim, Jimmy, or James Smith in the major league history.
History:  Smith has the shortest MLB stay of any subject so far.  If you blinked in '82 you likely missed his career.  Even though he had such a brief stay in the majors, Fleer and Donruss each produced a card for Smith in '83.﻿
Posted by Brandon at 1:36 PM