Hatcher is pictured here on his fourth Topps card while taking batting practice.  Topps used a lot of batting practice pics in the '80 set but not too many in this set.  Personally, I appreciate any pic with Tiger Stadium in the background. 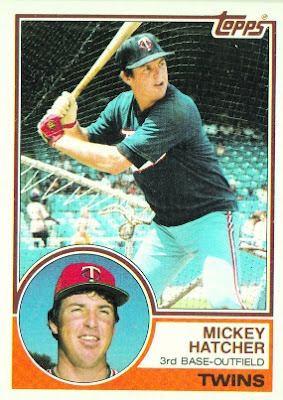 Player:  After playing football and baseball at the University of Oklahoma, Mickey Hatcher was drafted by the Dodgers in 1977.  He debuted in '79, playing right field and third base and batted .269 with a home run in 93 at bats.
Hatcher was up and down with the Dodgers in 1980.  He tore up the minors but struggled in LA, finishing the year with a .226 average with most of his at bats coming as a pinch hitter.  With the emergence of Pedro Guerrero, the Dodgers felt Hatcher was expendable and dealt him and two minor leaguers to the Twins for Ken Landreaux.
Hatcher received regular playing time with his new team in '81.  The Twins played him in CF and although he only made two errors, his range was sub par.  Hatcher posted slash stats of .255/.285/.350 in 377 at bats.  He was a reserve in '82 DH-ing and playing the corner OF positions.  He was quite a hacker walking only eight times in 286 plate appearances as he hit just .249 with a meager 65+ OPS.
Hatcher turned things around in '83 batting .317 in 375 at bats with a career high nine home runs.  Hatcher didn't waste much time in the batters box walking 14 times and striking out just 19.  His performance earned him the starting left fielder job in '84 and he showed good range posting 1.7 dWAR.  Hatcher batted .302/.342/.406 playing in a career high 152 games.  He played semi-regularly over the next two years batting .278 and .282 with three homers each year.
The Twins released Hatcher during spring training in '87 and he was picked up by the Dodgers.  Reunited with his old team, Hatcher pinch hit and backed up at the four corner positions batting .293 in '88.  Hatcher played first base in NLCS against the Mets and filled in for the injured Kirk Gibson in LF in the World Series.  Hatcher had a great series, belting two homers and batting .368 as the Dodgers took out the A's in five games.
Hatcher continued as a bench player in '89 and batted .295 in 224 at bats.  His production fell apart in '90 as he posted a line of .212/.248/.250.  Hatcher retired and started his coaching career in AAA in '91.  He was active for 17 games but hit just .160 for Albuquerque and that was the end of his playing days. 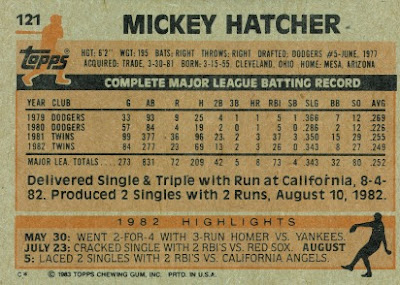 Flipside:  Topps really dug deep into their verb vault on this card.  We have delivered, produced, went, cracked, and laced in the highlights.
Oddball:  Hatcher gained national attention during the '88 World Series for his frantic scramble around the bases on his two homers and his dash to first after a base on balls.  Of course a whole blog could probably devoted to the goofiness of Mickey Hatcher.
History:  Hatcher was a World Series hero for the Dodgers in '88.  He was traded away from LA a year before they won in '81 and was cut by the Twins when they won in '87.  In 12 MLB seasons, he posted a career line of .280/.313/.377.  Offfensively he hit for average but didn't offer much else.
Hatcher coached and managed in the Dodgers system for several years and has been the Angels hitting coach for the past 12 years.
Posted by Brandon at 1:13 PM