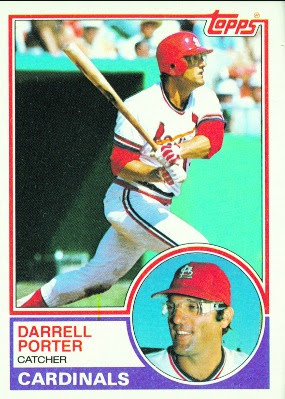 Card:  Porter makes his 13 appearance on a Topps card.
Pic:  This is a really nice shot of the left-handed hitting Porter swinging the stick.  Athletic eyewear sure has come a long way since the early 80's.  Porter was a rare catcher to wear glasses behind the plate.
Player:  Darrell Porter was a first round pick of the Brewers back in 1970.  The 19 year-old catcher made his MLB debut in September of ’71 and hit .214 in 70 at bats with two homers.  Porter spent most of ’72 back in the minors and was recalled at the end of the year but batted just .125.  Porter made the Brewers big league squad out of spring training in ’73 and played in 117 games, mostly against right handed pitching.  He hit 16 home runs with a .254/.363/.457 line and finished third in ROY voting.
Porter continued in this role for Milwaukee over the next three year and was even named to the AL All-Star team in ’74.  However his average slipped each year from ’74 – ’76, going from .241 to .232 to .208.  His power was inconsistent as well, hitting 12, 18, and 5 dingers.
The Brewers traded Porter to the Royals after the ’76 season in a five player deal.  Porter had his best years with the Royals hitting 16, 18, and a career best 20 homers in the ’77-’79 seasons.  He had a career year in ’79 putting up a .291/.421/.484 line.  He led the AL with 121 walks and also had 100+ RBI and runs scored.
Drug and alcohol problems plagued Porter throughout his life and he went through rehab for the first time in 1980.  On the field, he couldn’t duplicate his previous performance and hit just .249 with seven homers.  Porter batted over .300 in both of the Royals trips to the playoffs in ALCS losses in ’77 and ’78 but hit just 3-38 in the ’80 ALCS win over the Yankees and the World Series loss to the Phillies.
Porter was a free-agent after the 1980 season and signed with the Cardinals.  Although he hit for low average the next two seasons (.224 and .231), Porter was always able to work the count and drew many walks leading to a high on base percentage (.364 and .347).  The Cardinals won the NL East in ’82 and Porter tore up Braves pitching in the three game sweep.  He hit three doubles, batted .556, and took home NLCS MVP honors.  The 30 year-old backstop stayed hot in the World Series as well, hitting two doubles and a homer in the Cardinals triumph over the Brewers.  For his work in the Fall Classic Porter was named '82 World Series MVP.
Porter had a good year in ’83 hitting .262 with 15 home runs.  In his last season as a regular, Porter’s offensive output dropped to a .232 average with 11 homers in ’84.  He hit just .221 in an injury plagued '85 season.  Porter went 4-15 in the NLCS as the Cards knocked out the Dodgers.  He had just two hits in fifteen at bats as the Royals dumped the Cardinals in the ’85 World Series.
St. Louis released Porter after the ’85 season and he signed with the Texas Rangers.  He played a backup role for the Rangers and batted .265 and .238 in the ’86 and ’87 seasons.  Porter retired and did some broadcasting work and dealt antiques.  Tragically, Porter never was able to shake his drug problem and his life ended 8/5/02 when he had a cocaine-fueled heart attack while trying to push his truck out of a ditch. 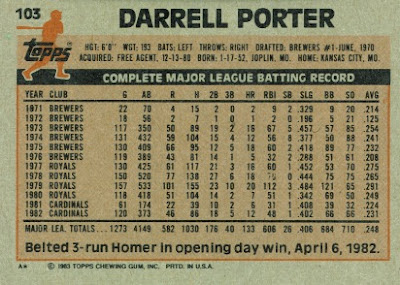 Flipside:  Another '82 highlight:  Porter went 3-3, with a double, two walks, two runs, and two RBI in a 9-4 win on 7/27/82.
Oddball:  Drug addiction is nothing to joke about and this example from his wikipedia page is an example of Porter's troubles:

Porter told the Associated Press that during the winter of 1979-1980, he became paranoid, convinced that baseball commissioner Bowie Kuhn, known to be tough on drug use, knew about his drug abuse, was trying to sneak into his house, and planned to ban him from baseball for life. Porter found himself sitting up at night in the dark watching out the front window, waiting for Kuhn to approach, clutching billiard balls and a shotgun.

History:  Porter was a talented athlete and is somewhat underrated.  The left-handed hitting catcher hit 188 HR in his career to go with a 113 OPS+.  Porter a four-time All-Star, could have easily won the MVP in '79 when he filled the stat sheet and had 8.4 WAR.  He won a World Series with the Cards in '82 as well as the series MVP.  He appeared in the postseason five times in his career.
It's not a stretch to say that had he not stuggled with substance abuse, he could have had a Hall of Fame career.  The real tragedy is that he died way too young.
﻿
Posted by Brandon at 6:10 PM