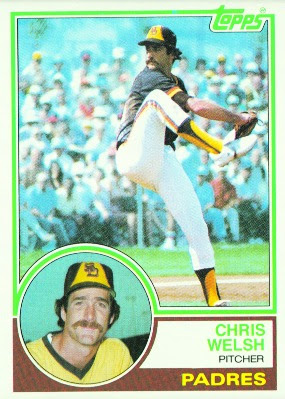 Pic:  Topps captures Welsh mid-delivery and we see that he had an unusual leg kick.  I'm not digging the neon green with the Padres cards.
Player:  Chris Welsh was drafted by the Yankees in the 21st round of the '77 draft.  He spent four years in the minors and as the '81 season was getting ready to start he was traded to the Padres.
Welsh was plugged into San Diego's starting rotation and made 19 starts in '81.  The rookie posted a 3.78 ERA with a 6-7 record in 123 innings of work.  The soft-tossing lefty spent most of '82 as a starter but was not as successful as the year prior.  Although he was 8-8 he had a 4.91 ERA in 139 frames with an abysmal 63/48 walk to strikeout ratio.

Welsh started '83 in the Padres bullpen with one spot start before he was sold to the Expos.  In 59 combined major league innings he posted a 4.42 ERA.  He had a strong year in '84, albeit in AAA Indianapolis, winning 13 with a 3.01 ERA.

The Expos traded Welsh to the Rangers for Dave Hostetler in December of '84.  The 30 year-old lefty made his way back to the majors in May  of '85 and worked in long relief and made six starts.  He logged 76 innings with a 4.13 ERA and was released after the season was over.

The Reds picked up Welsh for the '86 season and he made 24 starts with a 6-9 record and a 4.78 ERA.  Welsh was cut loose by the Reds and he spent a few weeks with Baltimore's AAA affiliate in before hanging up the cleats in '87.

Stuff:  Side-arm fastball mid 80s, sinker low 80s, overhand curve.  He also threw a change up that he gripped like a splitter and turned it over like a screwball. 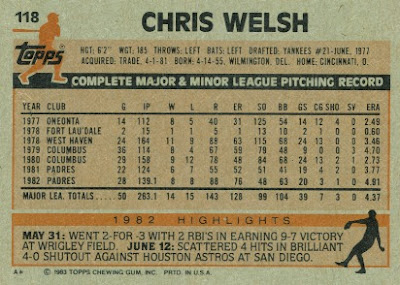 Flipside:  The shutout on June 12 was impressive but it's a good thing he had two RBI in the May 31 game because he gave up six runs in 6.1 innings.  I'm sure Welsh was more proud of his other two complete game wins, but hey, two hits by a pitcher is pretty cool.
Oddball:  Here is a video of Welsh (now a Reds broadcaster)crying in the dugout in an ad for JTM Foods while Bronson Arroyo sings and plays guitar.  Yeah, I think it fits in the oddball category.
History:  Welsh did not have a very distinguished MLB career.  He had career record of 22-31 with a 4.45 ERA.  He had a deceptive funky straight arm motion and kind of slung the ball toward the plate.  In today's era of specialization he probably would be a one or two batter lefty reliever.﻿
Posted by Brandon at 9:12 PM