This is Dave Schmidt's 2nd Topps card.  For the third card in a row Topps features a player who appeared on a three player Future Star card in the '82 set. 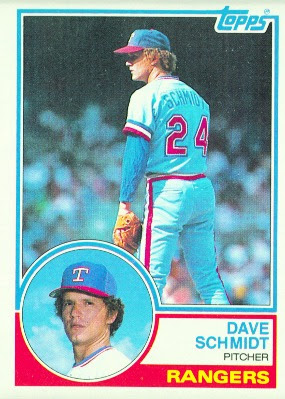 Pic:  Here we see Schmidt in the stretch position.  I like inset pictures with a blue sky background.
Player:  Dave Schmidt was a 26th round pick out of UCLA by the Rangers in 1979.  By '81 he debuted with Texas, pitching in 14 games with one start.  He earned one save in 31 innings with a 3.13 ERA.  Schmidt made Rangers for good in '82 but they struggled to find a role for him.  He started out in a mop-up role, started a few games, back to mopping up, middle relief, saved four games in July, and joined the rotation for a while in August and ended the season on the DL with bone spurs in his elbow.  He finished the year with a 3.20 ERA in 109 innings with 4 wins and 6 saves.
Schmidt recovered from surgery to repair his elbow but didn't pitch again until May of '83.  He pitched purely in a relief role the next two years appearing in 74 games over the '83/'84 seasons with ERAs of 3.88 and 2.56.  The Rangers had a league low 21 saves in '84 but Schmidt recorded 12 of them.  Schmidt made four starts in '85 (including a complete game shutout) but pitched mainly in short relief.  He logged 85 innings with five saves and a 3.15 ERA.
Following the '85 season Schmidt was dealt to the White Sox in a five player trade.  In a bullpen by committee, he saved 8 games sharing closer duties with Bob James, Gene Nelson, and a young Bobby Thigpen.  Schimdt worked 92 frames with a 3.31 ERA.For some reason the White Sox released Schmidt in December and he was signed by the Orioles.
Schmidt had always considered himself a starter and the pitching poor O's gave him a shot.  He threw a three hit shutout on 6/24 and a two-hitter on 7/12 and didn't walk a batter in either game. He moved in and out of the rotation over '87-'89 seasons with a 28-23 record.  He was successful his first two years with ERAs of 3.77 and 3.40.  However things went south as Baltimore relied on him for a heavier workload in '89.  Pitching in a career high 156 innings, Schmidt gave up 196 hits and 24 HR leading to a 5.69 ERA.  This was the first time in his career his ERA was above four.
Schmidt moved on as a free-agent with the Expos and was closing games by May.  He saved 13 games with a 4.31 ERA but did not pitch after an injury in July.  Schmidt never really recoverd as he was shelled in four outings in '91.  He tried again in '92 with Seattle but gave up seven runs in 3.1 innings.  He was released by Seattle and caught on with AAA Tacoma (A's) but he retired after he failed to get on track.  Schmidt pitched 12 seasons in the big leagues with a 3.88 ERA in 902 innings with 54 wins and 50 saves. 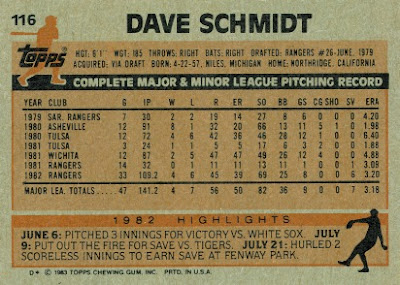 ﻿
Flipside:  Check out this wild game that Schmidt started on 8/17/82.  He went ten innings and left with the game tied 1-1.  The White Sox scored two runs off the pen in the top of the 11th, but the Ranger first baseman Dave Hostetler hit a three-run homer to end the game.
Oddball:  Schmidt's career splits indicate a 3.52 ERA in the first half versus a second half ERA of 4.42.  Perhaps juggling him back and forthe between the pen and rotation tooks a toll on Schmidt as the year wore on.
History:  Schmidt never pitched in the post-season or was an All-Star, but he was an effective set-up man for several years.  His flexibility to start and work out of the pen was a benefit to the teams he pitched on, but he may have been better off used strictly in relief.
Today Schmidt is the Coordinator of Sarasota Operations, Baltimore's Gulf Coast League affiliate.﻿
Posted by Brandon at 4:50 PM