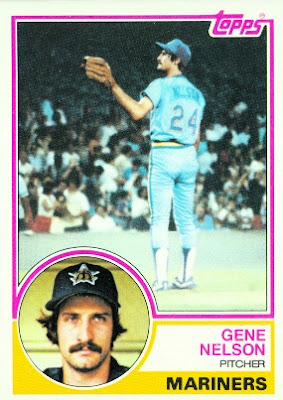 Card:  Nelson is pictured on his 2nd Topps card.  He appeared as a Yankee on his rookie card in the '82 set.
Pic:  Wow, this shot really stands out as this is the first night photo in the set.  The shot itself is cools as Nelson waits for the ball from the catcher.
Player:  Gene Nelson was originally drafted by the Rangers in 1978, and traded to the Yankees in the Mickey Rivers / Oscar Gamble trade.  Nelson had quite an amazing season while pitching at single-A Fort Lauderdale in 1980.  Nelson went 20-3 with a 1.97 ERA, pitching 196 innings and completing 16 of his 25 starts as a 19 year-old.   After starting ’81 in the minors, Nelson made his debut with the Yankees in May of ’81 and made seven starts before returning to the minors.  He also made one relief appearance in September.  Nelson’s major league stats for the year indicate how wild he was with 23 walks in 39 innings.  He finished 3-1 with a 4.81 ERA
Just before the start of the ’82 season, Nelson was traded with Bill Caudill and Bobby Brown to Seattle for Shane Rawley.  Nelson spent part of ’82 at AAA Salt Lake City, but made 19 starts for the Mariners with a 4.62 ERA.  He had all kinds of trouble in ’83, and spent most of the year getting knocked around at Salt Lake.  While in Seattle, Nelson gave up 29 runs in 32 innings of work.
Nelson was suffering through another rough year at Salt Lake, when he was traded with Jerry Don Gleaton to the White Sox for Salome Barojas.  Chicago put Nelson to work immediately and used the slim righty as both a starter and reliever.  Starting nine of his twenty games, Nelson had a 4.46 ERA in 74 innings.  Nelson began to find his control and walked only two batters per nine innings.  Nelson continued to improve with a 4.26 ERA in ’85 and a 3.85 ERA in ’86.  Although he would continue to make an occasional spot start, Nelson was settling into the set-up role that would eventually define his career.
After the ’86 season Chicago, sent Nelson to the Oakland for infielder Donnie Hill.  He had a 3.93 ERA in 123 innings in ’87, and as manager Tony LaRussa and pitching coach Dave Duncan sorted out the bullpen in Oakland, Nelson would become Dennis Eckersley’s 8th inning set-up man.  Nelson pitched very well in ’88 with a 3.06 ERA and pitched in the postseason for the first time.  Nelson earned two ALCS wins and gave up just one run in 11 postseason innings as the A’s lost to the Dodgers in the first of three consecutive series appearances by Oakland.  Nelson had a 3.26 ERA in ’89 and helped the A’s win the World Series over the Giants.  The 29 year-old enjoyed a brilliant campaign in 1990.  Pitching in 74.2 frames, he had a 1.57 ERA and allowed less than a runner per inning.   Oakland lost to Reds in the ’90 World Series but Nelson had pitched well, as he was unscored upon in 6.2 postseason innings.
The next two years were forgettable for Nelson as he posted ERAs over six.  Oakland released Nelson after the ’92 season and he signed with the Angels.  Nelson was hot and cold with California, effective most of the time, but getting hit hard in close games.  Nelson had a 3.08 ERA but a 0-5 record for the Halos.  They released him in September and he signed days later with the Rangers.  Nelson gave up three runs in eight innings for Texas as the season came to an end.  Nelson retired after 13 seasons in the majors. 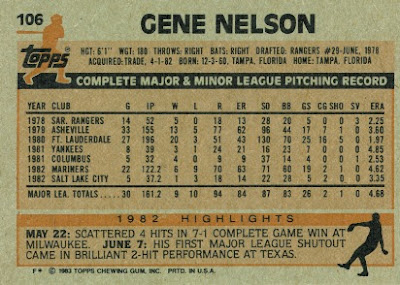 Flipside:  That 20 win season really stands out.  Doubtful we will see any 19 year-olds throw 16 complete games or pile up 196 innings again.
Oddball:  Nelson was a good athlete and pinch ran six times and stole a base in '88 becoming the first AL pitcher to swipe a base since Blue Moon Odom pulled the trick in '73.
Nelson also pinch hit for Greg Walker in '85 and grounded into a double play to end a blowout loss to the Indians.
History:  Nelson started his career as an unheralded 30th round pick.  He gained notoriety with his eye-popping stats in A-ball.  Nelson wasn't effective as a starting pitcher in the majors but found his groove with the A's during their World Series years.  He retired with a 4.13 ERA in 493 games with 28 saves.  ﻿
Posted by Brandon at 6:07 PM