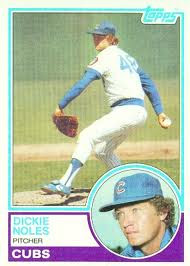 Card:  Noles is pictured on his 4th Topps card
Pic:  Noles is captured in action on the mound in a classic delivery.
Player:  Dickie Noles, a fourth round pick of the Phillies in 1975, debuted in the majors in ’79.  He joined the rotation during the middle of the season and made 14 starts.  He walked about as many as he struck out (38/42) but managed to miss enough bats to post a league average ERA and finish with a 3-4 record.
Noles was used mainly as relief pitcher in ’80, posting a 3.89 ERA in 48 games.  After 2.2 scoreless innings of relief in the ’80 NLCS against Houston, Noles made a memorable appearance in Game 4 of the World Series.  With the Royals quickly up 4-0 with only one out in the first, Noles took over on the mound for Larry Christianson.  Noles pitched 4.2 innings and allowed only one run.  His fourth inning pitch that buzzed George Brett’s tower was not out of character for the intense Noles.   Although the Royals won the game, the purpose pitch seemed to fire up the Phillies as they went on to win the World Series.
Noles started eight games for the Phillies and made five appearances out of the pen in ’81.   He had a 4.17 ERA in 58 innings.  He made one start in the ’81 NLDS and received a no decision.
Philadelphia traded Noles to the Cubs after the ’81 season, sending the righty, Keith Moreland, and Dan Larson away in exchange for Mike Krukow and cash.   Noles stepped into the rotation in ’82 making 30 starts with a 10-13 record and 4.42 ERA.  He missed part of the ‘83 undergoing rehab for alcohol-ism after his arrest in bar brawl.  When he played, he split time between the pen and rotation with a 4.72 ERA in 116 innings.
In July of ’84, the Cubs traded Noles to the Rangers for two minor leaguers.  Noles pitched poorly for both teams with a 5.15 ERA at both stops.  Noles pitched out of the pen and was a spot starter for Texas in ’85 with a 5.06 ERA in 110 innings.
Noles was released by Texas and signed with Cleveland for the ’86 season.  Noles pitched 54 innings of relief with the Indians with a 5.10 ERA.
Noles returned to the Cubs via free-agency in ’87 and performed well in 64 innings notching a 3.50 ERA.  The Cubs traded Noles to the Tigers at the tail end of the regular season for the infamous player to be named later.  Noles pitched in four games down the stretch and earned two saves as the Tigers overtook the Blue Jays to win the division.  There is some controversy over whether it was planned as a loan or that the two teams truly could not agree on the PTBNL, but Noles was returned to the Cubs over the winter.  This meant he was essentially traded for himself, or as some saw it, the Cubs loaned out Noles to the Tigers for no charge other than two weeks salary.
The Cubs released Noles and he bounced around the Orioles, Yankees, and Phillies organizations over the next three years.  He pitched only 3.2 innings in the majors over this time and allowed ten runs.  He retired at age 33, with a 4.56 career ERA, 36 wins, and 11 saves.
﻿ 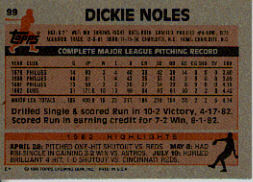 Flipside:  Those two shutouts in '82 were two of the three that Noles would throw in his career.
Oddball:  Noles was suspended for a spell in 1980 for throwing his bat at umpire Joe West.
Dickie is his given name, I always figured it was short for Richard or Dick.  But nope Dickie Ray Noles.
History:  Noles had an up and down career but won a championship with the Phillies in '80.  He spent parts of eleven seasons in the majors but also parts of twelve seasons in the minors.  His brushback pitch against Brett and the Royals is what most people seem to remember him by.
Noles overcame the problems of his wild youth and now works for the Phillies and MLB counseling players about life skills and the dangers of drugs and alcohol.
﻿
Posted by Brandon at 5:57 PM