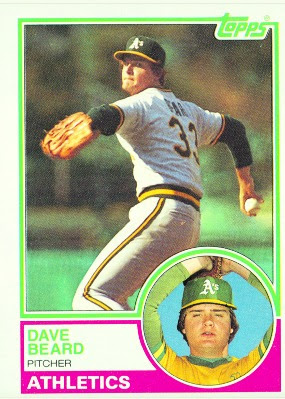 Card:  This Beard’s second Topps card.  He first appeared on a three player prospect card in the ’81 set.
Pic:  Beard has a classic looking delivery, too bad the back-ground is so fuzzy.  The inset pic is terrible, with his fist in his glove without the ball....a pet peeve of mine I suppose.
On another note, I was always disappointed that Dave Beard never grew a beard.
Player:  Dave Beard was a 6th round pick of the A's in the '77 draft.  Before reaching the majors, Beard was primarily a starter in the minors but spent almost all of his time in the majors in the pen.  He appeared in 13 games in 1980 and 8 more in '81.  The 6'5" righty did well for himself notching 4 saves with ERA of 3.38 and 2.77.  Despite not being used much in the regular season, he earned a save in the ALDS against the Royals but was rocked for three runs in less than an inning of work against the Yankees in the ALCS.
Beard was with the A's for most of '82.  He made 52 appearances, earned 11 saves, with a 3.44 ERA in 91 innings.   He saved 10 games in '83, but struggled mightily with a 5.61 ERA over 61 innings of work.

After the '83 season the A's traded Beard along with Bob Kearney to the Mariners for Bill Caudill and Darrel Akerfields.  Beard saved five games for his new team, but spent most of the year pitching in middle relief with an unimpressive 5.80 ERA in 76 innings.

The following spring, Beard was released by the Mariners and signed by the Indians.  Beard looked sharp for the Indians AAA team and they flipped him to the Cubs in return for outfielder Tom Grant.  The Cubs called him up in September, but Beard was hit hard, allowing nine runs in 12.2 innings.

Beard spent the next few years in the minors and was even out of baseball during the '87 season. The Tigers gave him a chance in July of '89 but he was tagged with the loss in both of his games, giving up a seven runs in 5.1 innings.  Beard was sent back down to the minors and retired after the season. 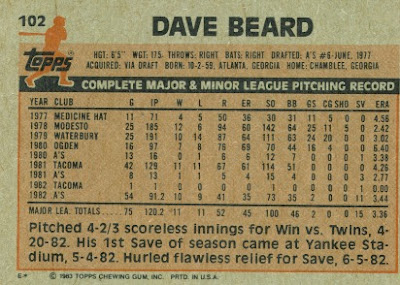 Flipside:  Beard's '82 season is easily his best year.  His WAR in '82 was 0.8 and and -3.5 the rest of his career.
Oddball:  Beard started a game 6/5/82 after pitching the final two innings the night before.   Beard gave up six runs in 6.1 innings.  After resting for a day, Beard threw three more innings on the 6/7.  I couldn't follow his manager, Billy Martin's crazy pitching rotation.  Martin of course was notorious for abusing his pitchers while in Oakland, and Beard was no exception.
It's no wonder that Seattle traded for Beard.  While pitching against the Mariners, Beard racked up six saves in 10 innings and gave up only one run.
History:  Beard retired before he turned 30, with a 19-20 career record, 30 saves, and a 5.06 ERA in 275.2 innings.  He did very well at AAA but had only one good year in the majors.  He is a good example of a pitcher who never really found his niche.
﻿
Posted by Brandon at 5:37 PM