Card:  You’re looking at Ron Roenicke’s 2nd Topps card and the first card of his own. 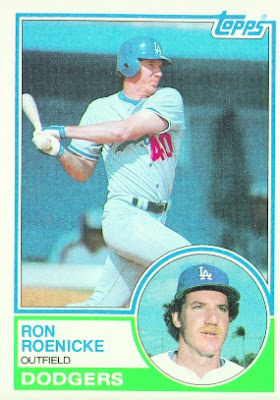 Pic:  Here is a picture of Roenicke following through with a lefthanded swing against the Expos. Thirty years later he looks quite different.
Player:  Ron Roenicke was drafted by the Dodgers in the first round of the 1977 draft.  While in the minors the switch-hitting outfielder displayed the ability to hit for average, take walks, and steal bases with a high of 47 steals at double-A in 1979.  In 1981 he dominated AAA ball with a slash line of .316/.450/.526.  His performance earned him a September call up and he batted .234 in 47 at bats for the Dodgers.   He made the team to start the ’82 campaign and was used as a pinch hitter and spare outfielder.  He batted  .259 in 143 at bats but his ability to milk a walk carried over to the big leagues as his 21 walks helped him to a .359 OBP.
Roenicke was again a reserve for LA in ’83, but with the emergence of slugging Mike Marshall the Dodgers had no room and released him in July.  He signed with Seattle and received regular playing time in center and left field.  He batted .239 in 343 combined at bats with 6 HR.  Seattle cut him during spring training in ’84 and he signed with the Padres.  He spent most of the year at AAA but was called up at the end of the season and had six hits in twenty at bats.  He did not play in the NLCS but did appear in two World Series games but did not bat as San Diego lost to Detroit in five games.
Roenicke was again a spring training casualty but caught on with the Giants in ’85.  He batted .256/.408/.406 in 133 at bats and backed up all three outfield spots.  In ’86 he was cut by San Fran, signed by Oakland assigned to AAA Tacoma, and sold to Philadelphia, all in a month’s span.  He platooned in centerfield with Milt Thompson for the Phillies in ’86 batting 275 times.  He offset a .247 average with 61 walks leading to a nifty .381 OBP.  He had tough time in ’87 batting .167 in 78 at bats and was in AAA Maine as much as Philadelphia.
The Phillies let him go and he spent ’88 between Cincinnati and AAA Nashville.  He batted .135 in 37 big league at bats in what would be his final year of MLB action.  He spent ’89 in Texas’ farm system and then started his coaching career.  In 1,294 at bats he batted .238/.353/.338 with 17 HR and 24 SB. 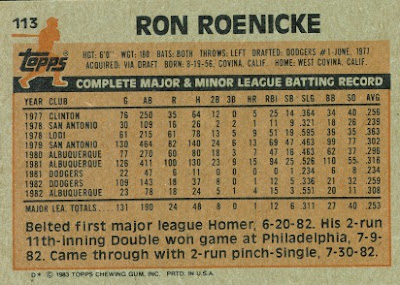 Flipside:  If you think those are some impressive walk totals in his minor league stats, you are correct.  He walked in 17.1% of his minor league plate appearances.
Oddball:  There is a Brewer fan site at ronroenickestolemybaseball.com which is basically covers allthings Brewers and other baseball stuff.
History:  Roenicke at his best was a useful bench player for a while.  He got on base often and played good defense.  His on base ability would probably be appreciated a little more in today's SABR-friendly era of statistical analysis.  Ron's brother Gary played in big leagues for twelve years. They never played against each other in the regular season since they spent the majority of their time in opposite leagues.  They did play together in Senior Baseball as seen this card here.
Like many ex-players Roenicke coached after his playing days ended.  After serving on the Dodgers and Angels coaching staffs Roenicke took over the manager’s post in Milwaukee for the 2011 season.  He led the team to the NLCS in his first year at the helm.
Posted by Brandon at 6:40 PM