Leon Durham is pictured leading off third base here on his third Topps card.  I like this photo as Topps tends to get in a rut with the batting shots. 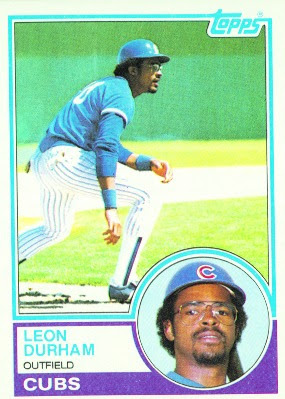 Player:  Leon Durham was a first round pick of the Cardinals in 1976.  He played first base and some outfield in the minors was called up in May of 1980.  With Keith Hernandez entrenched at firstbase, Durham played the corner outfield spots and played in 96 games.  He batted .271 with eight homers and 8 stolen bases.  After the season, the Cards sent Durham, Ken Reitz and Ty Waller to the Cubs for Bruce Sutter.
Durham changed teams, but was still blocked at first base by Bill Buckner so he landed in right field.  Durham performed reasonably well at the plate with a .290/.344/.460 line while adding 25 steals in the strike shortened '81 campaign.  He split time evenly between center and rightfield in '82.  He batted .312, belted 22 HR, and drove in 90 runs.  He swiped 28 bases and posted a 151 OPS+.  His production netted him an All-Star selection and Silver Slugger award.  Durham battled injuries throughout the '83 season and batted.258 in only 409 plate appearances.
The Cubs moved Durham to first base and traded Buckner early in the '84 season.  "Bull" had a very good year batting .279/.369/.505 along with 23 HR and 96 RBI.  At this point he still had decent wheels and stole 16 bases.  The Cubs won the division and although he hit two homers in the NLCS he is remembered for something else.  He made a crucial error in deciding Game 5 which the Padres ultimately won.
Durham continued on with the Cubs, hitting 20+ HR each of the next three years with batting averages from .262 to .282.  Each year he missed more time with injuries and played only 131 games in '87.  The Cubs traded Durham to the Reds for pitcher Pat Perry on 5/19/88.  Durham struggled before and after the trade and spent most of year in drug and alcohol rehab.  He batted just .218 in 45 games.
After the season, Durham was released by the Reds.  He signed with St.Louis over the winter and spent the first half of the year in AAA.  He was called up but was rarely used getting just one hit in 18 at bats.  He failed a drug test and was suspended in September for the remainder of the season.  Durham tried to come back several times playing mainly in independent leagues.  He got as far as the Angels AAA team in '95 but never made it back to the majors.  He retired with 147 HR in ten seasons and a career line of .277/.356/.475
﻿ 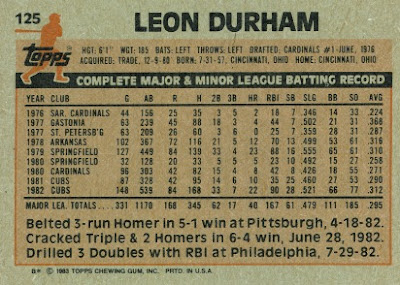 Flipside:  You can see that Durham was from Cincinnati but as you read his return home did nothing to revive his career.
History:  Fair or not, Durham is often lumped in with his Cubs predecessor at 1B, Bill Buckner, as a postseason goat.   He was a productive offensive force his first six years in the league with an OPS+ of 129.  Like far too many althletes, drugs and alcohol hastened his decline and he was washed up at age 30.
Durham has been the Tigers AAA hitting coach at Toledo for since 2001.﻿
Posted by Brandon at 6:58 PM