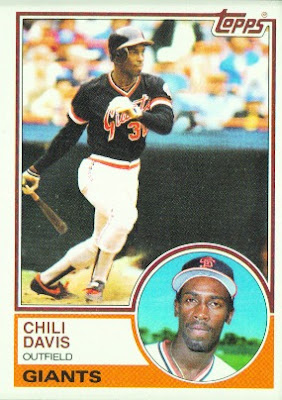 Pic:  Looks like Davis just hit a ball to the right side, you can really see Davis' eyes watching where he hit it.  That seems pretty cool to see on a card but runs counter to what I'm always telling the little leaguers..
Player:  Chili Davis was drafted out of high school in the 11th round by the Giants in 1977.  As a catcher in rookie ball he had 22 errors and 22 passed balls in 49 games prompting a move to the outfield.  With an impressive spring training he made the Giants in '81 but didn't play much and was sent down after just 15 at bats.  The switch-hitting centerfielder was a fixture atop the Giants lineup in '82 and batted .261 with 19 homers and 24 steals.  Davis finished fourth in ROY voting.  Offseason surgery on an injured ankle robbed Davis of some speed as he would never again top 20 steals.
Davis slumped as a sophomore and batted just .233 with 11 HR.  1984 was a breakout year for Davis as he batted .315 with 21 HR and 81 RBI.  He was voted to his first All-Star team and posted a 148 OPS+.  The next two years were so-so as he batted in the .270s with 13 HR both years.  By now he was splitting time between center and right field.  Davis slugged 24 homers and stole 16 bases in '87 as Giants won the NL West.  Chili was chilly in the NLCS going 3-20 as the Giants lost to the Cards.
Davis signed with the Angels as a free-agent and spent the '88-'90 seasons in California.  He hit 20+ HR his first two years and batted .268 and .271.  His production tapered off a bit in 1990 as he battled back problems and adjusted to his new DH role.  As '91 approached, Davis signed with the Twins and assumed the DH position full-time.  He belted 29 homers, drove in 93 runs, and walked a career best 95 times.  The Twins won the World Series as Davis homered in games 2 and 3 against the Braves.  He hit for average in '92 (.288) but his power waned as he hit just 12 HR.
Davis returned to the Angels where he would play the next four seasons.  In '93 he had a career best 112 RBI.  In '94 and '95 the labor strife shortened two very productive years.  He posted a slash line of .315/.420/.527 while hitting 46 long balls in 227 games.  Davis kept up the steady production, batting .292 with 28 dingers in '96.  After the season he was traded to Kansas City for Mark Gubicza and Mike Bovee.  Davis hit a career high 30 homers for the Royals in '97 and was once again a free-agent.
Davis signed with the New York Yankees and injured his ankle in the second game of the year.  He was out until August but came back and hit .291 in 103 at bats.  Davis started 8 of the Yankees 13 playoff games hitting .259 with a homer as the Yankees won the first of consecutive championships.  He returned as their regular DH in '99 and batted .269 with 19 HR.  He was a part time player in the postseason hitting just 2 singles in 18 at bats as the Yankees repeated.  Davis retired after 19 seasons with 2,380 hits, 350 HR, 1,372 RBI and a line of .274/.360/.451. 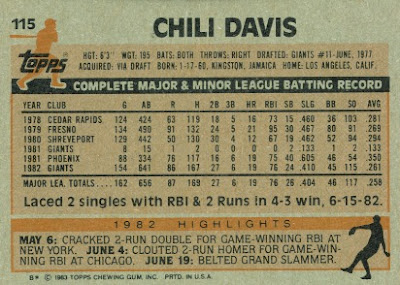 Flipside: Davis was the first Jamaican born player to play in the majors.  He moved to LA with his family when he was 10 years old.  He later played with fellow Jamaican Devon White with the Angels.

Oddball:  You might think that Davis' nickname of Chili is some sort of take on his given name of Charles but it's not.  He was given the name after a bad hair cut at age twelve that made his hair look as if it had been shaped by a chili bowl.
Davis was hit by pitch only 15 times in 19 seasons.

History:  Davis was a three time All-Star and won three championships in his career.  As far as switch-hitters are concerned, Davis' 350 HR are only surpassed by Mickey Mantle, Eddie Murray, Chipper Jones, and Lance Berkman.  Davis was well respected by his teammates and was often referred to as a steady veteran influence wherever he played.  Here is a pretty in depth bio on Davis.
His post playing days have been sprinkled with coaching positions in various organizations.  He was Pawtucket's hitting coach in 2011 and was named Oakland A's hitting coach for the 2012 season.
Posted by Brandon at 3:17 PM