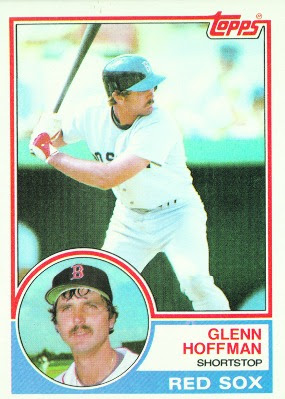 Card:  Hoffman shows up here on his third Topps card.
Pic:  This is a nice shot of Hoffman, a little closer than most of the action shots.  I don't know how Hoffman could wear his hat like that over his bangs.
Player:  Glenn Hoffman was a second round pick of the Red Sox in '76.   A highly touted shortstop in the minors, Hoffman made Boston squad in 1980 as a third base defensive sub for the error prone Butch Hobson. As Hobson struggled with his health, Hoffman earned more playing time and hit .285 with four homers in 312 at bats.
Boston traded shortstop Rick Burleson which opened the door for Hoffman in '81.  Hoffman hit just .231/.271/.285 in 242 at bats.  Defensively he showed decent range and a strong arm.  He played in 150 games in '82 but did little at the plate, hitting just .209.

Hoffman returned as Boston's shortstop in '83 and showed some improvement batting .260, but he sustained a serious season ending knee injury in September.

Hoffman struggled out of the gate in '84 and lost his job to Jackie Guttierez.  With his knee still not 100%, Hoffman played sparingly and batted .189 in 74 at bats.  With improved health and hitting, he earned more playing time in '85, batting 279 times.  He hit .276/.343/.416 with his on base and slugging percentages representing career highs.

While his teammates were busy winning the AL East in '86, Hoffman dealt with numerous health issues.  First he had an ankle injury which limited him in April.  In May he was hampered by head aches and blurred vision.  Eventually he was diagnosed with mitral-valve prolapse a minor heart condition.  Hoffman returned in September but he only played in 12 games on the season.  The Sox had their roster set and he was on the outside looking in.

Hoffman was playing very little for the Red Sox in '87 when he was sent down to AAA Pawtucket.  He played there for a couple of months and was traded to the Dodgers.  He played in 40 games down the stretch and hit .220.  The Dodgers released Hoffman and he spent the '88 season in the minors.  He reappeared in the majors in '89 and played a utility role for the Angels hitting .212 in 104 at bats.

Hoffman was a player/asst. coach for AAA Albuquerque in 1990.  Following the season, he put to bed dreams of playing again in the majors, and concentrated on his coaching career. 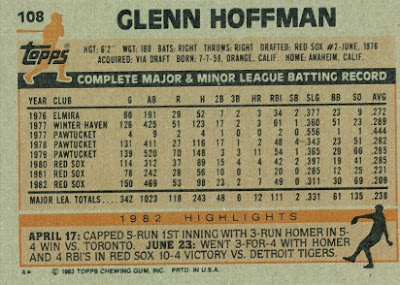 Flipside:  The back mentions his HR in the April 17 game.  Hoffman also played a big part in Boston's win the following day.  In a tie game, he led off the bottom of the ninth with a triple and two batters later scored the game winning run on a wild pitch.
Oddball:  Usually you can count on a middle infielder to steal a few bases, but Hoffman was absolutely terrible in this department.  He was caught stealing 16 times in 21 career  attempts.
History:  Hoffman started his career as a hot prospect but his weak bat and some serious injuries hampered his career.  He never walked more than 30 times in a season and had very little extra-base power.
Glenn is the older brother of retired ace closer Trevor Hoffman.  By the time Trevor reached the big leagues in '93, Glenn, nine years older, was already retired.
Hoffman managed in the Dodgers minor league system for a while and was promoted to run the team in L.A. when Bill Russell was axed.  Hoffman stuck around on Davey Johnson's staff when he took over and is currently the Padres third base coach.
﻿
Posted by Brandon at 11:29 AM