This is Brookens’ 4th Topps card. 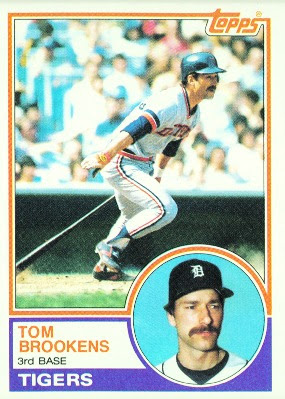 Pic:  Brookens is breaking out of the batters box.  We've seen a few shots like this lately.  Topps would use a very similar pic in '84 for Brookens.


Brookens played semi-regularly at third over the next three years batting between .214 and .243 while also backing up Lou Whitaker at 2B and Alan Trammell at SS.  By 1984 he was fighting off young Howard Johnson for playing time and he was used as a reserve.  He batted .246 as the Tigers rolled to a World Championship.  Brookens didn’t play much in the postseason going hitless in five at bats.


The Tigers traded HoJo away and Brookens was the default starter at third base in ‘85.  He played in a career high 156 games and hit 34 doubles but batted just .237.  In ‘86 the Tigers had Darnell Coles at third base and Brookens was again a utility player.  He batted .270 in his reduced role and was used all over the field.  Coles slumped in ’87 and Brookens regained the starting job and hit a career high 13 HR while batting .241.  He went hitless in 13 at bats in the ALCS as the Twins defeated the Tigers.  Brookens was a regular for the ’88 season putting up a familiar line of .243/.313/.351 in 136 games.


On the brink of the ’89 season the Tigers dealt Brookens to the Yankees for lefty Charles Hudson.  Brookens filled a utility infielder role for New York and batted .226 in 168 at bats.  He was released following the season and signed with the Indians for the ’90 season.  Brookens batted .266 in his last year for the Tribe and he retired following the season.  In 12 seasons he batted .246/.296/.367 with 71 HR and 86 SB. 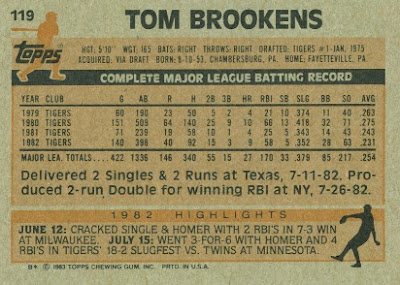 Flipside:  In addition to the highlights listed, on 9/6/82, Brookens hit a homer to lead off the top of the 10th inning to put the Tigs on top in a 6-5 win.
Oddball:  Brookens was forced into catching duty during an extra inning game on 7/20/85.  After manager Sparky Anderson had pinch hit for both his catchers, Brookens caught the last five innings of the Tigers 6-5 win in 15 innings.  As this game ran past my ten-year-old bedtime, I had to get the game recap the next day.  I remember the picture in the paper the next day.  I wish I could find it, he looked like a little kid inside the catchers gear.
Tom's twin brother Tim played in the minors for four years with Texas and Detroit.
History:  Brookens was not a great player by any stretch.  He never posted and OPS+ over 100 but was consistently mediocre.  His batting average never topped .275 but managers knew what to expect from him.  He had good range at third base and in his first seven years in the league he averaged 0.8 dWAR.
Today, Brookens is the Tigers first base coach.
﻿
﻿
Posted by Brandon at 6:21 PM