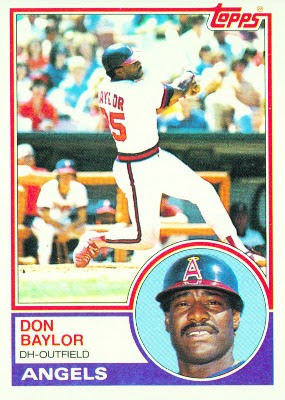 Card:  This is Baylor 13th Topps Card.  His position is listed as DH-Outfield, but Baylor didn’t use his glove at all in ’82 and only had appeared in the field six times since 1980.
Pic:  Baylor seems mildly irritated about getting his picture taken.  I don't think I'd want to make big Don upset.
Player:  Don Baylor was a 2nd round choice of the Orioles in the ’67 draft.  After very brief stints with the O’s in ’70 and ’71, Baylor made the Baltimore squad in ’72.  He played all three outfield positions and played in 102 games, batting .253 with 11 HR.  Now playing mainly in leftfield, Baylor’s playing time gradually increased.  He batted .286 and .272 with 32 and 29 steals over the ‘73/’74 seasons.  Baylor batted .273 and .267 in the ALCS, with the Orioles losing to the A’s in both ’73 and ’74.  After hitting 31 total homers over the previous three seasons, Baylor’s power surged in ’75 with 25 HR.  He produced a .282/.360/.489 line and stole 32 bases.
Days before the start of the ’76 season, Baltimore traded Baylor to Oakland in a six player deal that sent Reggie Jackson to the Orioles.   Baylor only played one year for the A’s and batted just .247 with 15 HR but set a career high with 52 stolen bases.
Baylor was one of the first big name free-agents and he signed a six year deal to play for the Angels.  Splitting time between the outfield and DH, Baylor hit in the .250s the next two years with 25 and 34 homers.   Playing in every game, Baylor had a career year in ’79.  He hit .296/.371/.530 with 36 HR and 139 RBI and earned MVP honors.  His production wasn’t there in the playoffs, as he batted just .188 in the ALCS loss to the Orioles.
Baylor was troubled by injuries in 1980, missing time with a broken wrist and later a dislocated toe.  The season was a disaster for Baylor as he hit just .250 with five home runs in 340 at bats.   By now a full time DH, his power came back in ’81, hitting 17 bombs during the strike shortened schedule.  He had a decent year in ’82 batting .263 with 24 HR and 93 RBI.  Baylor had a fine playoff series, knocking in 10 runs in five games but it wasn’t enough as the Angels were knocked out by the Brewers.
Once again a free-agent, Baylor signed with the Yankees before the ’84 season.  He hit .303 his first year in the Big Apple but saw his average slip to .262 and then to .231.  Baylor spent three years in New York and hit a total of 71 home runs there while driving in around 90 each year.   After invoking his no-trade clause to block a trade to the White Sox, he accepted a trade to Boston before the ’86 season.
In Boston, the 37 year-old Baylor spent ’86 as a full-time player for the last time and batted .238 with 31 HR. Baylor had three doubles, a homer, and batted .346 helping the Red Sox defeat the Angels. For the first time in five tries Baylor’s team made it to the World Series. He batted just .182 as the Red Sox lost to the Mets in seven games.
Baylor started ’87 with Boston but was acquired by the Twins late in the ’87 season. Baylor hit a combined .245 on the year with 16 homers in 388 at bats. He went 2 for 5 against the Tigers in the ALCS and his .385 average helped the Twins defeat the Cardinals in the World Series.  At age 38 Baylor had won the championship that had eluded him so many times before.
Baylor returned to Oakland for the ’88 season and hit just .220/.332/.326 in 264 at bats with only 7 HR. With the A’s losing to the Dodgers in the World Series, Baylor was the first player to appear in three consecutive Fall Classics with three different teams. Baylor was hitless in seven postseason at bats and decided to retire.  He finished his career with 338 HR, 1,276 RBI, 285 steals, and a modern record 267 hit by pitches (Since broken by Craig Biggio). 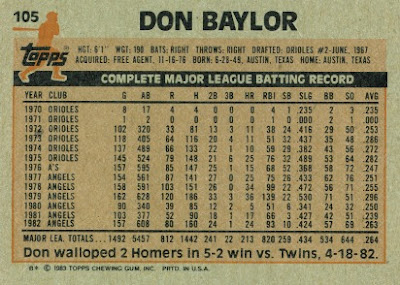 Flipside: Baylor had that monster year in '79 but never had
another close to it. It was the only year he had over a .500
slugging percentage and his only year with 100+ RBI.
Oddball: According to former MLB umpire Ken Kaiser, the hardest hit hit ball he ever saw was off Baylor's bat. Kaiser claims the ball glanced off the third baseman's glove and over the outfield wall for a home run. Seems hard to believe that a ball touched by an infielder could carry over the fence...sounds like a tall tale to me.
History: Baylor had a long career in which he won an MVP and a World Series. He won three Silver Slugger awards and his veteran influence was appreciated at the end of his career as much as his bat.
After his playing days Baylor immediately started his coaching career. He first worked as a hitting coach for the Brewers and then the Cardinals. He was the Rockies first manager and was their skipper from '93 to '98. He then served as Atlanta's hitting coach before taking over control of the Cubs. He managed in Chicago from '00 to '02 and resumed his hitting coach duties for the Mets, Mariners, Rockies, and now the Diamondbacks.