Marc Hill shows up here on his 9th Topps card.  Although not a candid action shot, it is an interesting staged picture with the ball mid air as Hill gets ready to take a whack.  The background makes the ball difficult to see with the sun shining on the bright yellow seats in the background.  I can't tell if Hill is wearing a traditional windbreaker or a rubber suit to help him shed weight. 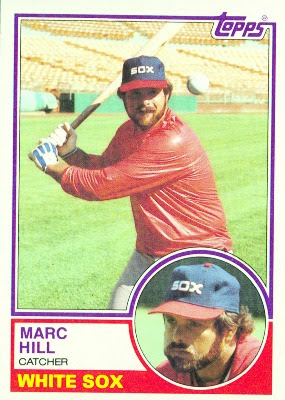 Player:  Marc Hill debuted with the St. Louis Cardinals by catching a two-hit shutout at the tail end of the 1973 season.  A 10th round pick in the 1970 draft, Hill was blocked at catcher by Ted Simmons and Tim McCarver and spent all but ten games in '74 back at AAA.

In October of '74, Hill was traded to the Giants for Ken Rudolph and Elias Sosa.  With San Fran he played a reserve role and batted .214 in '75.  He returned in that role in '76 and his average dipped to .183.  Hill had good defensive skills and a strong arm which helped him win the starting job in '77  He responded with his best year batting .250 with nine home runs in 320 at bats.  He hit .243 with three homers in '78 in what would be his last action as a regular.

In a reserve role Hill batted .207 in '79. Mid-way through the 1980 season he was sold to the Mariners.  He completed the year with another .207 batting mark.  Hill contemplated retirement but signed with the White Sox.  In Chicago, Hill was the third string catcher and rarely played.  In the entire '81 season he batted six times with zero hits. He played in 16 games that were usually out of hand by the time he got in. With his portly build and scruffy beard he fit right in with fellow Sox LaMarr Hoyt, Greg Luzinski, and Marv Foley.

Hill was Carlton Fisk's main backup in '82 and hit .261 with three long balls in 88 at bats.  Hill was known as a pranskter and although he didn't play much he seemed to be one of those "clubhouse" guys that management loves for being a good teammate and positive influence.  Hill hit .226 in '83 and did not play in the ALCS loss to the Orioles. 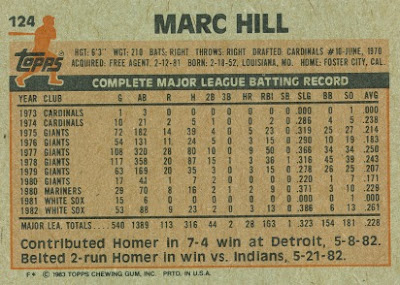 Flipside:  Hill also had a great game on 9/23.  He went 2-4 with a homer, double, and walk.
Oddball:  As mentioned earlier the White Sox had a portly bunch in the early 80's:

I could have added Britt Burns and Dennis Lamp too, but I think you get the point.
History:  Like recent post subject Mickey Hatcher, Hill was a prankster and fun guy to be around which along with his defensive skills kept him in the game for 14 years.  The only time his team made the playoffs he did not play.
Hill managed in the minors for a while and was on the Astros staff in '88.  He surfaced in '91 as the Yankees  bullpen coach.  He also managed in the minors for a while.
Hill was recently honored at his former high school on Feb 22.
Posted by Brandon at 7:39 PM