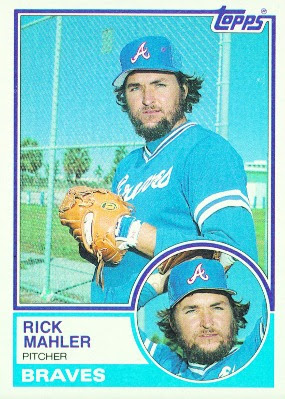 Card: This is Mahler's 2nd Topps card.  Topps didn't give him a card in '84 but he would be back for the '85 set.
Pic:  Another card full of blue.  I don't remember ever seeing a pitcher with a batting glove under their fielding glove.
Player:  Rick Mahler made his MLB debut in 1979 as the Braves mop up man.  Mahler was teammates in Atlanta for a year with his older brother Mickey.  Despite pitching well as a starter in AAA (2.59 ERA in 188 inn), Mahler spent all but two games in the minors in 1980. He made the Braves in '81 and after sporting a 1.59 ERA in 20 relief appearances, moved into the rotation for the rest of the year.  He finished 8-6 with a 2.80 ERA in 112 innings.
Mahler was the Braves opening day starter in '82 and he pitched shutouts in his first two starts.  Things went downhill from there and he was out of the rotation by September.  The Braves lost the NLCS with Mahler pitching a scoreless 1.2 innings in Game 3.  Although he started hot, he ended the year with a 9-10 record and a ERA of 4.21 (ERA+ 89).  Mahler started '83 in the pen but spent most of the year in AAA. He once again began the '84 season in the Braves pen but this time worked his way into the rotation by May.  He completed 9 of his 29 starts, logged 222 innings with a 3.12 ERA and a 13-10 record.
Although now in his early 30's Mahler was just entering his prime and was the Braves opening day starter from '85 through '88.  He threw shutouts in '86 and '87 to tie an NL record with his third opening day shutout.  1985 was his best year winning 17 with a 3.48 ERA, making a league best 39 starts.  He led the league again in '86 with 39 starts but his ERA jumped to 4.88 and he led the league in losses with 17.  After his shutout to start the year, 1987 was a struggle for Mahler and he was banished to the pen for a while and ended the year with a 4.98 ERA.  The Braves were terrible in 1988 so even though Mahler lowered his ERA to 3.69, he finished with a 9-16 mark.
Mahler signed with the Reds for the '89 season and was in their rotation most of the year.  He finished 9-13 with a 3.83 ERA (ERA+ 94).  Mahler was a spot starter, long reliever, and occasional closer in '90 making 16 starts and getting four saves.  He had a 4.28 ERA in 134 innings.  Mahler pitched a scoreless 1.2 innings in the NLCS against the Pirates.  The Reds knocked off the A's in the World Series, but Mahler did not see action. 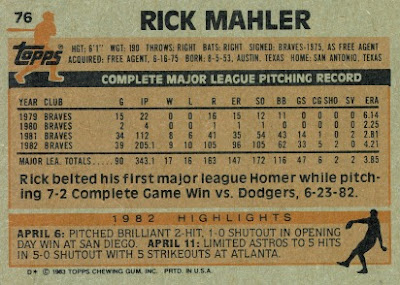 Flipside:  Unlike many cards, Topps does a good job covering Mahler's highlights here on the back.
Oddball:  Mahler had nine shutouts in his career, three on opening day. He also led the league in hits allowed four times in a five year span which seems pretty weird.  Usually after a pitcher gets knocked around a bit they usually end up in the pen, in the minors, or out of baseball.  However Mahler pitched a lot and didn't miss a lot of bats.  One of those seasons was actually pretty good, two were terrible and one was so-so.
History:  Mahler will be remembered for his opening day heroics by Braves fans and those who grew up watching TBS.  He was a true inning eating workhorse, making 39 starts twice and logging 220+ innings five times.  Mahler won a World Series with the Reds in 1990 as a multi-purpose pitcher.
After retiring, Mahler worked as a coach in the Royals, Marlins, Cardinals, and Mets chains.  Sadly he died of a heart attack while at spring training with the Mets on March 2, 2005.﻿
Posted by Brandon at 7:11 PM