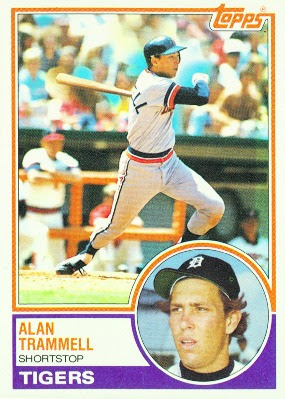 Card:  This is Trammell's sixth Topps card.  He shares a classic rookie card with Paul Molitor in the '78 set.
Pic:  Trammell looks like he's scrambling out of the batters box in a day game against the Angels.  Topps could have used a more flattering shot of Trammell in the inset.
Player:  Alan Trammell was a 2nd round pick of the Tigers in '76 and debuted at the end of the '77 season along with long time double play partner Lou Whitaker .  Trammell, a raw 19 year-old shortstop, batted .186 in 43 at bats.  He won a spot in the Tigers starting lineup for the '78 season.  While he learning the ropes of big league play he batted .268 and .276 over the '78/'79 seasons.
In 1980 Tram hit .300 for the first time and was rewarded with his first All-Star appearance.  Trammell batted just .258 both of the next two years but was an asset with the glove, posting 15 and 10 fielding runs above average according to Total Zone.  Trammell was entering his prime and reached a new level of performance in '83 batting .319/.385/.471 with 14 HR and 30 stolen bases.  For his efforts Trammell was named AL Comeback Player of the Year. 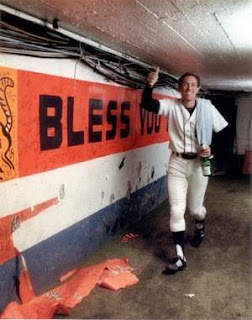 Trammell battled knee and shoulder injuries in '85 and hit just .258.  After off season surgery to repair both of his damaged limbs, he hit 21 dingers in '86.  With 25 steals Trammell joined teammate Kirk Gibson as the only two Tigers to have 20/20 seasons. (Since matched by C.Granderson)
1987 would be Trammell's best season.  Batting cleanup, he hit 28 home runs with a .343/.402/.551 line.  Over the last month of the season Tram hit .417 with seven homers as the Tigers overtook the Blue Jays to win the AL East in the last week of the season.  The Tigers ran out of gas in the ALCS and were bounced by the Twins.  Trammell finished 2nd in MVP voting behind George Bell, although Tram or Wade Boggs were more deserving. 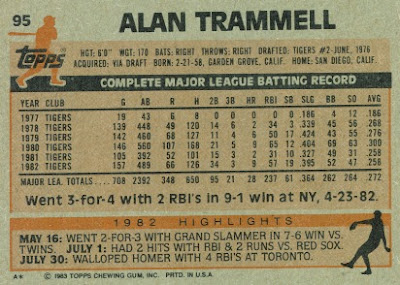 Flipside:  Looking at the stats here on the back, it shows how the '83 season was a turning point in his career.  Through '82 he had hit .300 just once and had yet to hit for power.  From '83 forward he would hit .300+ six more times with eight seasons of 10+ HR.
Oddball:  Check out this video of Trammell and Whitaker appearing on Magnum PI.
History:  Trammell was a six time All-Star and won a World Series MVP.   He won three Silver Slugger awards to go with his four Gold Gloves.  He was not a flashy player but was fundamentally sound and always seemed to make the right play.  Tram and Whitaker were the longest running double play combo in MLB history.  Baseball stat guru and historian Bill James rates Trammell the ninth best shortstop of all-time.  Trammell's HOF candidacy has picked up steam as he received 36.8% of the vote after receiving 24.3% of the vote in 2011.
After his playing career Trammell was the Tigers hitting coach in '99 and then was the Padres first base coach for three years.  He returned to manage the Tigers from '03-'05.  From '07-'10 he was the Cubs bench coach and is currently the bench coach for former teammate and Diamondback manager Kirk Gibson.
Posted by Brandon at 12:43 PM