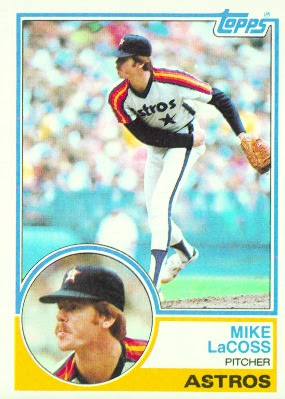 Card:  LaCoss shows up here on card #92, his fifth Topps card.
Pic:  LaCoss is in his follow through, possibly at Shea Stadium.  It looks like the inset picture was taken a frame or two before or after the action shot.
Player:   Mike LaCoss was drafted in the 3rd round by the Reds in 1974. Halfway through the '78 season, LaCoss was called up to Cincinnati.  He made 15 starts  and ended his rookie year with a 4-8 record and a 4.50 ERA.  LaCoss excelled during his second year and was named to the NL All-Star squad with a 2.22 ERA.  LaCoss regressed in the second half but finished with a 14-8 record and a 3.50 ERA over 205 innings of work.  The 23 year-old hurler got the nod to start game 3 of the NLCS but was wild, walking four in 1.2 innings and took the loss as the Pirates swept the Reds out of postseason play.
LaCoss floundered in 1980 as he gave up 207 hits and 68 walks in 169 innings leading to a 4.62 ERA and 10-12 record.    He was even worse in '81 sporting a 6.12 ERA in 78 innings.
LaCoss was cut from the Reds in spring training in '82 and claimed off waivers by the Astros.  Pitching mostly out of the bullpen LaCoss managed to strand a lot of runners, many of them his own.  His WHIP of 1.400 and unimpressive 54/51 walk to strikeout ratio defy a much more impressive 2.90 ERA.   The Astros used LaCoss as both a starter and reliever over the next two years splitting his time almost evenly.  The results were middling, though he had an even 12-12 record, his ERAs of 4.43 and 4.02 were above league average.
The 6'5" righty was a free-agent and signed in 1985 with Kansas City.  Used exclusively as a reliever, LaCoss pitched in 21 games with a 5.09 ERA.  He was demoted to AAA Wichita in August.  Meanwhile the Royals went on to win the World Series.
LaCoss made the '86 Giants squad as a non-roster invitee to spring training. He pitched at the back end of the rotation, and occasionally in relief.  He won 23 games over the '86 and '87 seasons with ERAs of 3.57 and 3.68.  LaCoss was used out of the pen in the '87 NLCS, pitching 3.1 scoreless innings against the pennant winning Cardinals.  He pitched in 19 games, all starts in 1988, but the season ended prematurely due to a knee injury.  LaCoss had a 7-7 record and again had an ERA in the mid-threes.
LaCoss started the '89 season as the Giants closer and was doing a good job, when injuries to the starting staff forced him back into the rotation by the end of June.  He ended the year 10-10, with 6 saves and a 3.17 ERA in 150 innings.  He pitched poorly in the postseason giving up three runs in as many innings in his start against the Cubs.  He gave up three more in 4.1 innings in two relief appear-ances against the eventual champion Oakland A's.
LaCoss had knee surgery in 1990 and pitched in only 13 games.  He was ineffective in '91, getting knocked around to the tune of a 7.23 ERA in 47 innings and was released in July.  LaCoss tried to make it back with the Expos the following year but flamed out in AAA Indianapolis.  LaCoss finished his career with a 98-103 record and 4.02 ERA.
Stuff: Fastball, splitter, curve, and sinker 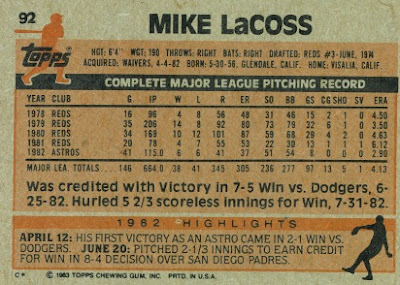 Flipside: In addition to the highlights listed, LaCoss also threw 7 shutout innings against the Braves on 9/14.

Oddball:  LaCoss hit two home runs in his career and they came in consecutive at bats, although they were hit in two separate games in 1986.  The first came off 1B/OF Dane Iorg who took the mound in a lopsided affair.  His second blast came off of Reds lefty Tom Browning on 6/29.

History:  LaCoss had an up and down career but pitched his best as a member of the San Fransisco Giants.  Like many who worked under him, LaCoss had his career revived by split-finger guru Roger Craig.  With San Fran, LaCoss kept his ERA under 4.00 in five of the six seasons he spent there and provided value in several roles.
LaCoss never won a championship, but had several close calls.  He was a few years late to the party with the Reds, was demoted mid-year by the '85 Royals and was knocked out the postseason twice with the '89 World Series his best shot at glory.
LaCoss was recently named pitching coach for the minor league San Rafael Pacifics.
Posted by Brandon at 6:41 PM