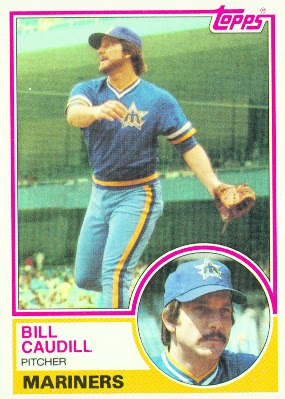 Card:  Topps captures Caudill halfway through his career, seen here on his 4th of 8th Topps cards.
Pic:  Caudill is warming up in the pen at Tiger Stadium.
Player:  Bill Caudill﻿ was drafted by the Cardinals but traded to the Reds and the Cubs before appearing in the majors.  A starter all throughout his minor league career Caudill debuted for the Cubs in May of 1978.  His rookie season he worked as a swing man, making 12 starts but never more than three in a row without a relief appearance.  He struck out 104 in 90 innings but gave up 16 gopher balls (11 at Wrigley Field) leading to a 4.80 ERA.
Caudill worked as Bruce Sutter's set-up man in 1980 and had a fantastic season pitching in 72 games with a 2.19 ERA over 127 innings.  The Cubs were desperate for starting pitching and moved Caudill to the rotation in May of '81.  He made ten starts but was moved back to the pen after pitching poorly.  He never got on track and finished the year with a 5.83 ERA.
Caudill was traded twice on 4/1/82, first to the Yankees and then to the Mariners where he assumed the closers role.  Caudill flourished in Seattle, earning 26 saves in 70 games with a 2.35 ERA.  Caudill pitched well enough to finish 7th in Cy Young voting.  He followed up in '83 with 26 more saves, but it wasn't as easy as the year prior as his ERA ballooned to 4.71.  After the '83 season Seattle traded the 27 year-old to Oakland.  Caudill had a fine year with a career high 36 saves and a 2.71 ERA.  In his lone All-Star game he struck out all three batters he faced.
Caudill was traded again, this time to Toronto.  He blew some games early in the year and shared the closer's job with Jim Acker and Tom Henke as the year went on.  Caudill recorded 16 saves and had a 2.99 ERA in 69 innings.  He struggled with a shoulder injury in '86 and pitched only 36 innings with a 6.19 ERA.  Released before the start of the '87 season, Caudill was signed by the A's and spent all but eight innings in AAA.  Caudill reportedly broke his hand punching a creep who accosted his wife.  The injury to his hand, along with arthritis in his shoulders ended his career at age 31.
Stuff: Low 90s fastball, cutter, slider, and change up 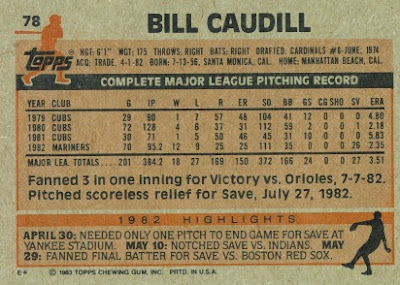 Flipside: You can see that Caudill started a pattern of good and bad seasons.  His ERA+ over his career: 87, 181, 64, 183, 91, 138, 144, 70, 48.  After he finally put together back to back good years in '84-'85, he struggled to end his career in '86-'87.
Oddball:  Caudill was quite the prankster in Seattle inspecting fellow M's bats for hit and discarding those he felt had run out earning him the "Inspector" moniker.  He once hid the keys to the bullpen car which was parked along the left field line, delaying the start of the game while it sat there waiting to be moved.
He also pitched in a game with half his face clean-shaven and the other half with a beard.
History:  Caudill had some good years pitching out of the pen for four different franchises.  Caudill never appeared in the post season although the Blue Jays played in the ALCS while he was there in '85.  He was traded five times and never really was able to find consistency.  Caudill is known as the first client of uber-agent Scott Boras who was once his minor league teammate.
Caudill has coached high school baseball with former Mariner teammate Julio Cruz since '95.  ﻿
Posted by Brandon at 8:24 PM