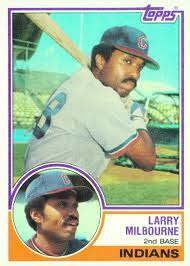 Card:  This is Milbourne’s 7th Topps Card.  He was a Topps All-Star rookie in the ’75 set but did not reappear until the ’78 set.
Pic: The well traveled Milbourne is air-brushed into his Indians uniform.  It makes him look like a cardboard cutout.  I despise airbrushing, but as you'll see Milbourne didn't usually stay in one place very long.
Player:  Larry Milbourne started his pro career in '69 and bounced around from franchise to franchise before getting a chance when the Astros took him in the rule five draft in 1974.  Now with his fifth franchise, Milbourne had finally made the big leagues.  He spent the '74 season as a reserve, often deployed as a pinch runner or defensive sub at second base.  The switch hitting rookie hit .279/.329/.309 in 136 at bats.  Milbourne was similarly used in '75 and '76 batting .212 and .248 respectively.
The Astros traded the 26 year-old infielder to Seattle during spring training in '77.   With the expansion Mariners, Milbourne had the game winning hit in the teams first win.  He played second and shortstop while batting .226 in 236 at bats.  Milbourne continued in a utility role for the Mariners through the 1980 season.  He played around 100 games each year and batted .226, .278, and .264 over this stretch.  In '78 he had a game to remember, belting homers from both sides of the plate in a 7-6 Mariners win on July 1st.  Those would his only home runs on the year.  In 1979 Milbourne led the AL with 12 pinch hits in 30 at bats.
Following the 1980 season, Milbourne was traded to the Yankees.    Playing a lessened role on a good team, he had his most efficient season in '81, batting .313 in 164 at bats backing up Bucky Dent and Willie Randolph.  Milbourne was thrust in the spotlight when Dent went down with an injury late in the season.  Milbourne more than held his own during the post-season, batting .327 over three rounds as the Yankees eventually lost to the Dodgers in the World Series.
Milbourne was traded in a five player deal in May of '82 to the Twins.  He spent two months with the Twins and was traded to the Indians.  Milbourne got the chance to play everyday with the Indians and batted .257 on the year as he racked up a career high 416 at bats.   Over the winter the Indians sold Milbourne to the Phillies.  He played 41 games for Philadelphia and was sold to the Yankees in July, batting .221 in 136 at bats.
Traded to the Mariners before the '84 season, Milbourne mainly played third base and batted .265 in 211 at bats.  He hung around at Calgary, the Mariners AAA affiliate in '85, but was released in August.  Milbourne then likely cashed in his frequent flier miles and ended his journeyman career with a flight back home to New Jersey. 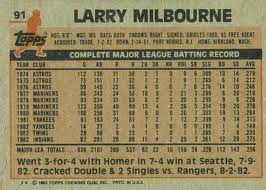 Flipside:  Milbourne bounced around in '82 but was red hot in August as he batted .333 (32/96)
Oddball:  Straight from his baseball-reference page here are Milbourne's transactions before he reached the major leagues:


·  June 18, 1969: Signed by the Baltimore Orioles as an amateur free agent.
·  April 7, 1970: Released by the Baltimore Orioles.
·  April 2, 1971: Signed as a Free Agent with the San Francisco Giants.
·  November 29, 1971: Drafted by the California Angels from the San Francisco Giants in the 1971 minor league draft.
·  November 27, 1972: Drafted by the St. Louis Cardinals from the California Angels in the 1972 minor league draft.
·  December 3, 1973: Drafted by the Houston Astros from the St. Louis Cardinals in the 1973 rule 5 draft
History:  Milbourne will be remembered as an original Mariner and for his well played postseason with the Yankees.  He had good speed and although he lacked both power and patience, he occasionally posted a decent batting average.  His only season with an OPS+ over 83 was with the Yankees in '81 (118).  His defense was average but he was valued enough for his versatility and switch-hitting that he always seemed to find a home.  Milbourne batted .254 in 11 seasons while playing for six different teams.
Posted by Brandon at 10:38 AM