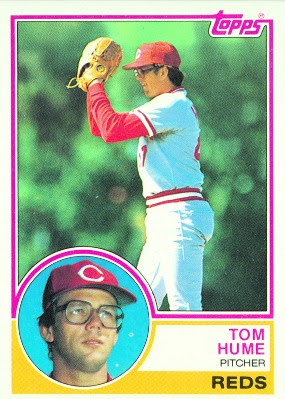 Card:  Hume shows up here on his sixth Topps card.  I have to talk about his '78 rookie card seen here. It is quite a doozy.  Young Tom is rocking the prescription shades, and shares the card with a sleepy Steve McCatty, a surprised Bruce Taylor, and an effeminate Larry Landreth.
Pic: Ok back to 80's...Hume's glasses are pretty big and make him look like an accountant but that was the style then.
Hume has quite the unusual shaped butt.
I never cared for the pink border...they are the Reds....use Red!
Player:  Tom Hume was drafted by the Reds in '72 and spent five plus seasons in the minors before coming to the majors in May of '77.   His debut did not go well at all, as the Giants rocked him for five runs while he failed to get out of the first inning.  On the year Hume made starts in 5 of his 14 games and had a 7.12 ERA.  Tom made the Reds rotation and started '78 as the Reds number four starter.  He was sent to the pen where he pitched much better there (2.43/4.54 ERA).
Hume started out '79 in the rotation but by May was back in the pen.  Hume made a few spot starts but excelled in his relief role so much that by the end of July he had supplanted Doug Bair in the closer's role.  Hume finished '79 with 17 saves in 57 games.  Although he barely qualified with 163 innings pitched,  his 2.67 ERA allowed him to finish 2nd in the NL.
Hume continued to do well as the Reds ace reliever in 1980.  Hume pitched in 78 games and led the NL with 62 games finished.  He had a 2.56 ERA, recorded 25 saves, and was named by the Sporting News as the NL Reliever of the Year.   Hume's walk rate nearly doubled in '81 and his ERA rose to 3.44 as he saved 13 in the srike year.
Hume was pitching fairly well in '82 when he went down with a season ending knee injury in late July.  Hume managed to make the NL All-Star squad and save 17 games for the Reds before the injury.
Coming back from injury wasn't easy for Hume as he struggled badly in '83 and '84 posting ERAs of 4.77 and 5.64. The 32 year-old Hume found his groove in '85 pitching 80 innings with a 3.26 ERA in a set-up role.
The Reds paired Hume with Gary Redus in an off season trade with the Phillies for John Denny and Jeff Gray.  Hume pitched well for his new team in '86, with a 2.77 ERA in 94 innings.  The wheels came off in '87 as he walked more batters than he struckout and was released by the Phillies with a 5.60 ERA in August.  Picked up by the Reds he pitched in 11 games but he hung up the spikes after the season.
Stuff: Fastball, slider, sinker 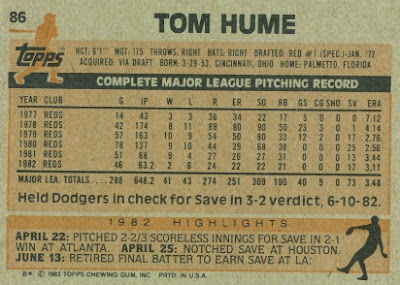 Flipside: Those were the days...7 of his 17 saves were of two or more innings pitched.

Oddball:  Along with Reds teammate Bill Bonham and their wives, Hume was airlifted by helicopter from the burning MGM Grand Hotel that cost 87 people their lives in 1980.  It was the second deadliest hotel fire in history.  The terrifying events can be read here.  Hume's portion starts about a third of the way down the page.
History:  At his peak, Hume was an effective closer and set-up man.  He pitched much better as a reliever than when in the starting rotation.  Hume finished his career with 92 saves and 3.85 ERA (98 ERA+) in 1,086 innings.
Hume was the Reds bullpen coach from '96-07.
Posted by Brandon at 8:58 PM