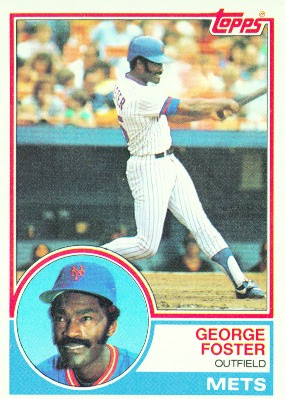 Card:  Foster appears here on his 13th Topps card.
Pic:  The powerful Foster shows off his classic swing and killer sideburns.
Player:  George Foster came up with the Giants and debuted late in the '69 season.  He played nine games for the Giants and nine more in 1970.  Foster had 8 hits in 24 at bats in these two trial runs but San Fran was set in the outfield with guys like Mays, Bonds, and Henderson.
Foster was traded to the Reds early in the '71 season for  Frank Duffy and Vern Geishert.  Foster got a chance to play regularly with the Reds and knocked 12 homers and batted .241 in 473 at bats.  However Foster was returned to a part time role until 1975.  Having hit just 13 homers in 460 at bats over the past three years, Foster took advantage of playing everyday and blasted 23 long balls and batted an even .300.  Foster was now a big time member of the Big Red Machine as they rolled to a World Series title in 1975.
Foster further improved in '76 leading the NL with 121 RBI, knocking 29 home runs and batting .306.  Foster finished 2nd in MVP voting behind teammate Joe Morgan.  Foster launched two dingers in the NLCS and batted .429 in the World Series win over the Yankees.  Foster exploded for 52 home runs in 1977 which not only led the NL, they were the most since Mays hit 52 in 1965.  He won MVP honors and led the league in runs, home runs, RBI, Slg%, OPS, total bases and registered 8.2 wins above replacement (WAR).
Foster kept producing and once again led the NL in HR-40, and RBI-120 in 1978.  He struggled with thigh, ankle, and back injuries over the next two years, sapping his power as he his HR totals dropped to 30 ands 25. Foster rebounded with 22 HR and a .295 average in the strike year of '81, finishing 3rd in MVP voting.
Before the '82 season commenced the Reds traded Foster to the Mets in exchange for Greg Harris, Jim Kern and Alex Trevino.  The 33 year-old struggled during his first year in New York batting .247 with only 13 homers.  Foster never regained the power stroke he displayed in Cincinnati and his days of hitting .300 were long gone.  He hit 28,24, and 21 HR over the '83, '84, and '85 seasons with the Mets.  In '86 he struggled greatly and was released in August.  He was picked up by the White Sox where he played for a month before they released him as well.  Foster retired with 348 home runs and 1,239 RBI. 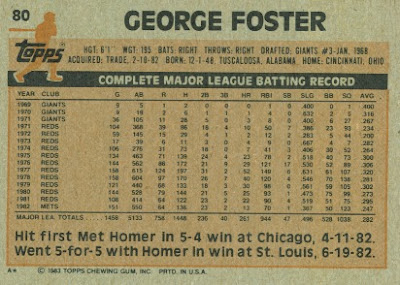 Flipside:  That's quite a stretch Foster had in the mid to late 70's.  From  '75-'79 Foster had a .302/.369/.560 line averaging 35 HR and 113 RBI.
Oddball:  Future Giant teammate Dave Kingman and Foster were on the same Little League team.
History:  Foster won two rings with the Reds and was unable to hang around for another with the Mets in '86.  He was the dominant slugger on the NL in the late 70's.  Foster's career took a while to get started and he declined steadily after leaving the Reds but he still had a fine career.  Foster won an MVP, received votes for the award in four other years and was a five time All-Star.
Today Foster works with youth teaching baseball fundamentals and skills and also works as a motivational speaker.
Posted by Brandon at 9:20 PM