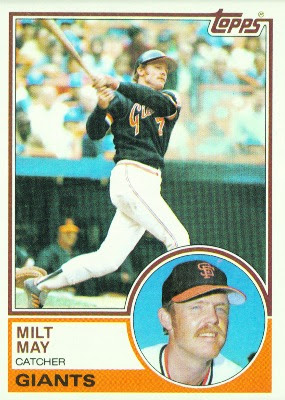 Card:  This the veteran May's 13th card.  He appears in every Topps set from 1971-85.
Pic:  This a nice shot of May following through with his swing at what appears to be Shea Stadium.
Player:  Milt May was drafted in '68 and spent two and a half years in minors and appeared in a briefly for the Pirates in September 1970.  At just 20 years of age, May was Manny Sanguillen's backup and went 1-2 in the '71 World Series as the Pirates knocked off the Orioles.  His lone hit...an RBI single in the 7th inning to break a 3-3 tie which proved to be the winning run.  May batted fairly well as a reserve with averages of .278, .281, and .269 while in Pittsburgh.  The Pirates moved Sanguillen to RF to start to the '73 season to replace Roberto Clemente, but that plan was scrapped after Sanguillen struggled defensively.  Sanguillen was moved back behind the plate and May resumed his bench role.
After the '73 season May was traded to the Astros straight up for Jerry Reuss.   Platooning in Houston, the left-handed hitting May had a productive year batting .289/.349/.402.  However, 1975 was not as successful as his on base percentage plummeted to .287.  Defensively, May was solid throwing out 42% of base steal attempts.
The Astros swapped May to the Tigers in a seven player deal that sent May, Jim Crawford and Dave Roberts to Detroit in exchange for Terry Humphrey, Mark Lemongello, Gene Pentz and Leon Roberts.  Just a week into the '76 season, May broke an ankle and his first year with the Tigers was lost.  The Tigers platooned May with Johnny Wockenfuss in '77 and rookie Lance Parrish in '78.  May found the short porch in Tiger Stadium to his liking and hit a career best 12 HR in '77 and followed up with 10 in '78.  With Parrish emerging behind the plate for the Tigers, May played very sparingly through the first two months of '79 and was sold to the White Sox.  For the third year in a row, he batted near .250 as he resumed his familiar platoon arrangement.  Following the '79 season, May was granted free-agency and signed with the Giants. 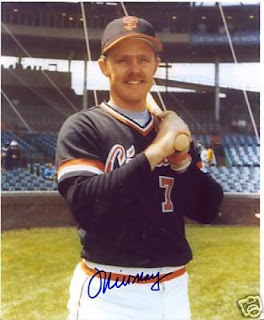 In San Fran, the lefty swinging May continued his consistent but unspectacular production with a .260 average and six HR.  He was wielding a hot bat in '81, leading to increased playing time as his .310 batting average was good for 7th in the NL.  May returned to his previous established levels in '82 batting .263.  By 1983 May was beginning to lose playing time to Bob Brenly and he was traded back to Pittsburgh his original team, for Steve Nicosia.  Despite the change in scenery, he batted his usual .250ish average with six homers.  In '84 May was relegated to a seldom used backup as he batted just .177.  At age 33 he retired and started his coaching career. 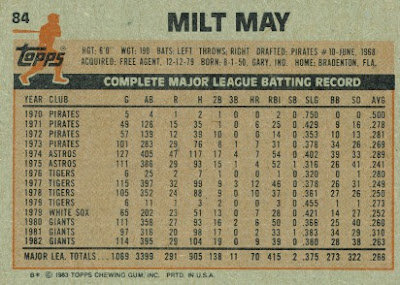 Flipside:  If they had room for highlights, Topps would have told of May's exploits on 7/1/82 when he clubbed two home runs, the second of which gave the Giants the lead in the 10th in a 8-7 win over the Expos.
Oddball:  May's career seemed to have some nice round numbered milestones.  On 5/4/75 he hit a three run HR to drive in Bob Watson in was touted as the millionth run scored in MLB history.  On 6/13/80 he hit the 9,000 HR in Giants history.
May has the distinction of being both a hitting coach and a pitching coach in the major leagues.  Not sure how many other coaches if any, have done that.  May was the hitting coach in Pittsburgh from '87-'96 and Colorado's pitching coach in the second half of the '99 season
History:  May came from good baseball stock as his dad Pinky May played from 1939-43. Milt was in the majors by age 20 and won a championship with the '71 Pirates.  He went on to play 15 seasons and could be relied on to bat around .260.  He had a strong arm and was regarded as a good defensive catcher.  May was said to be one of the slowest players in the game and that is supported by his lowly 4 steals in 17 career attempts.  After stealing his first bag in 1975 he was quoted as saying "I thought they'd stop the game and give me second base."
May has coached for numerous teams and was last coaching in the Orioles chain.
Posted by Brandon at 8:28 PM