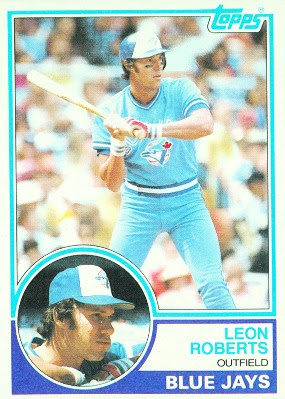 Card:  Roberts appears on his 8th regular issue Topps card.
Pic:  Topps captured Roberts in a Blue Jay uniform although he didn't play for Toronto until after a trade on July 15th.  Roberts looks like a down to earth, old school kinda guy.
Player:   Leon Roberts was selected by the Tigers in the 1972 draft after a stellar career at the University of Michigan.  He debuted with the Tigers in late 1974 and batted .270 in 63 at bats.   Roberts was the Tigers primary right fielder in ’75 and batted .257/.316/.385 with 10 HR.
Following the ’75 season he was traded to the Astros in a seven player deal.   Roberts platooned in left field batting .289 with seven long balls in 235 at bats.   In 1977 Roberts was buried deep on the Astros bench and after a 2-21 start to the season, he was sent down to the minors in June.  He returned with a hitless six at bat showing in September.

After the season the Seattle Mariners traded for Roberts and sent Jimmy Sexton to the Astros.   Roberts started in right field for Seattle and the 27 year-old enjoyed a career year.  Roberts hit 22 home runs and drove in 92 runs, both setting high water marks for his career.  His .301 batting average ranked 5th in the AL and his .879 OPS was 6th best.  Roberts found it difficult to duplicate his successful ’78 campaign, regressing to a .271 average while hitting 15 HR with 54 RBI in ’79.  His production further waned in ’80 batting .251 with only 10 homers.
For the third time in six years, a December trade sent Roberts packing.  This time he was dealt to Texas in an eleven player deal.    Roberts played both corner outfield spots for the Rangers and started against lefties.  He batted .279/.345/.421 in 72 games.  He was filling the same role in ’82 when he was sold to Toronto.  Roberts struggled with both teams and batted a combined .230 on the year.
Prior to spring training in ’83 he was sent to Kansas City in return for 19 year-old Cecil Fielder.  Roberts hit .258 for the Royals with eight home runs in a part-time role.  In 1984 Roberts played very sparingly, batting .222 in 45 at bats.  He did not make the post-season roster for the AL West champion Royals and was released after the season.  Roberts returned to the Tigers franchise and hit .267 at AAA Evansville before calling it quits in ’85. 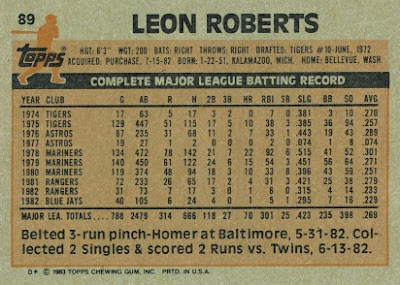 Flipside:  Both of the highlights on the back came while he was a Ranger.  After he was sold to Toronto he struggled quite a bit but had two 3-hit games in September.  Strangely the Blue Jays were shutout in both games despite Roberts efforts.
Topps lists Roberts birthplace as Kalamazoo, Michigan but most references list him as born in Vicksburg about a 15 minute drive from K'zoo.
I missed posting this on Roberts 61st birthday by one day...go figure.
Oddball:  It is much more fun to watch position players pitch than pitchers hit… On July 3, 1984 Roberts took the hill to finish a one-sided affair against the Indians.  Already down 12-3, the Indians added three more off Roberts including a home run by Chris Bando.  According to Roberts the home run glanced off of an outfielder's glove and over the fence.
History:  Roberts had an eleven year career in the big leagues and enjoyed his most productive seasons in Seattle, accumulating 9.8 WAR in his three years there.   Roberts completed his career with 78 HR and a .267/.332/.419 line.  Although he played for six different franchises he never tasted the postseason, just missing out with the Royals at the end of his career.
After his major league career was over, Roberts stuck around managing in the minors for the Tigers before playing in the Senior Baseball League. Since then he has served on several minor and major league staffs. It was announced on January 3rd that Roberts joined the Oklahoma City RedHawks (Astros) as their hitting coach.